Kantor and Łosiak crowned at the World Tour Warsaw. Historic achievement for Poland! 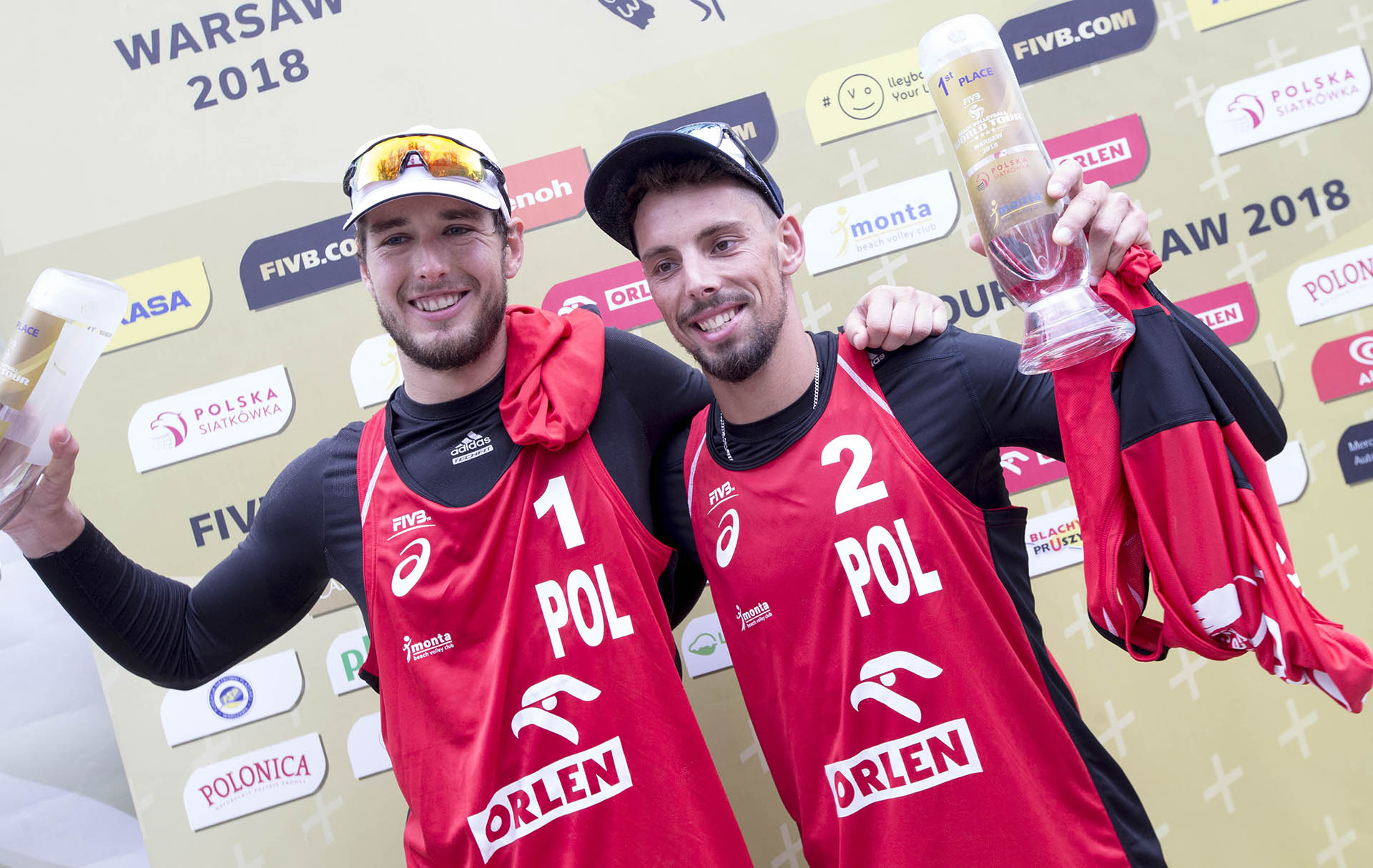 Piotr Kantor and Bartosz Łosiak emerged victorious in the final of the World Tour Warsaw. After extremly thrilling and exciting fight they defeated the Brazilians - Vitor Felipe Junior and Evandro Goncalves 2:1 (27:29, 21:13, 15:12).

Piotr Kantor and Bartosz Łosiak have waited for the victory at the World Tour event since March 2016, when they took a win at the Grand Slam in Rio de Janeiro. In this season they are continuing their impressive streak and for the third time in a row they took a medal. They are the first Polish duo to claim gold at the World Tour event on home soil.

In the gold medal match they clashed with the Brazilian duo Vitor Felipe/Evandro. Already the first set herald that no one should expect a quick match. The opening set was closed with 29:27 for Brazilians, Kantor and Łosiak did not used any of their three set points. Kantor was very successful in block, but in the last action he did not manage to stop the Canarinhos, who could celebrate winning only one set.  The next part was won by the white-and-reds with huge advantage (25:13). In tie-break they also jumped ahead leading 10:5, but then the rivals started to catch up the result. Fortunately, the Poles were one point ahead for whole time. During the last action Piotr Kantor impressed with block and fans gathered at Monta Beach Volley Club went crazy for joy. - We started to play better from the beginning of the second set - block, sideout - in these elements we have improved. In the first set I couldn't block them, also Bartek had to run a lot and since the second set something has changed and we were playing much better - said Kantor.

The beach volleyball fans in Poland have waited seven years to see the final with the Polish pair. In 2011 Grzegorz Fijałek and Mariusz Prudel played in the gold medal match in Stare Jabłonki, but finished second. Kantor and Łosiak are writing their own story, because as the first Polish duo they emerged victorious in front of home crowd.

- This year we claimed three medals, but every time the final didn't go well, because every time we performed worse. Now, we also haven't showed fantastic volleyball, nor everything we can, but we claimed gold and that's what matters. We made many mistakes - in service, counterattack. Gold tastes the best, especially won on Polish soil, in Warsaw. We are happy that we could give our fans a medal, the gold medal, which never happened before in our country at this level of competition - said Łosiak, who alongside Kantor triumphed at the U23 world championships in Mysłowice, but in the World Tour event in Poland it was their first win.

The winners of the World Tour Warsaw were happy that the Polish fans cheering carried them to victory. After the medal ceremony they were posing to photos and giving autographs for a very long time. - We are glad that so many fans supported the Polish duo. It gave us a lot of motivation. I am happy that beach volleyball is growing in Poland, because it's not a very well-known sport. It was the first men's tournament in Warsaw and we claimed gold, being extremely pleased about it. As far as I know the tournament will be hosted in Warsaw also next year, so we will have a chance to repeat this success and maybe some other Poles will join and we will have more medals for our country - added Łosiak.