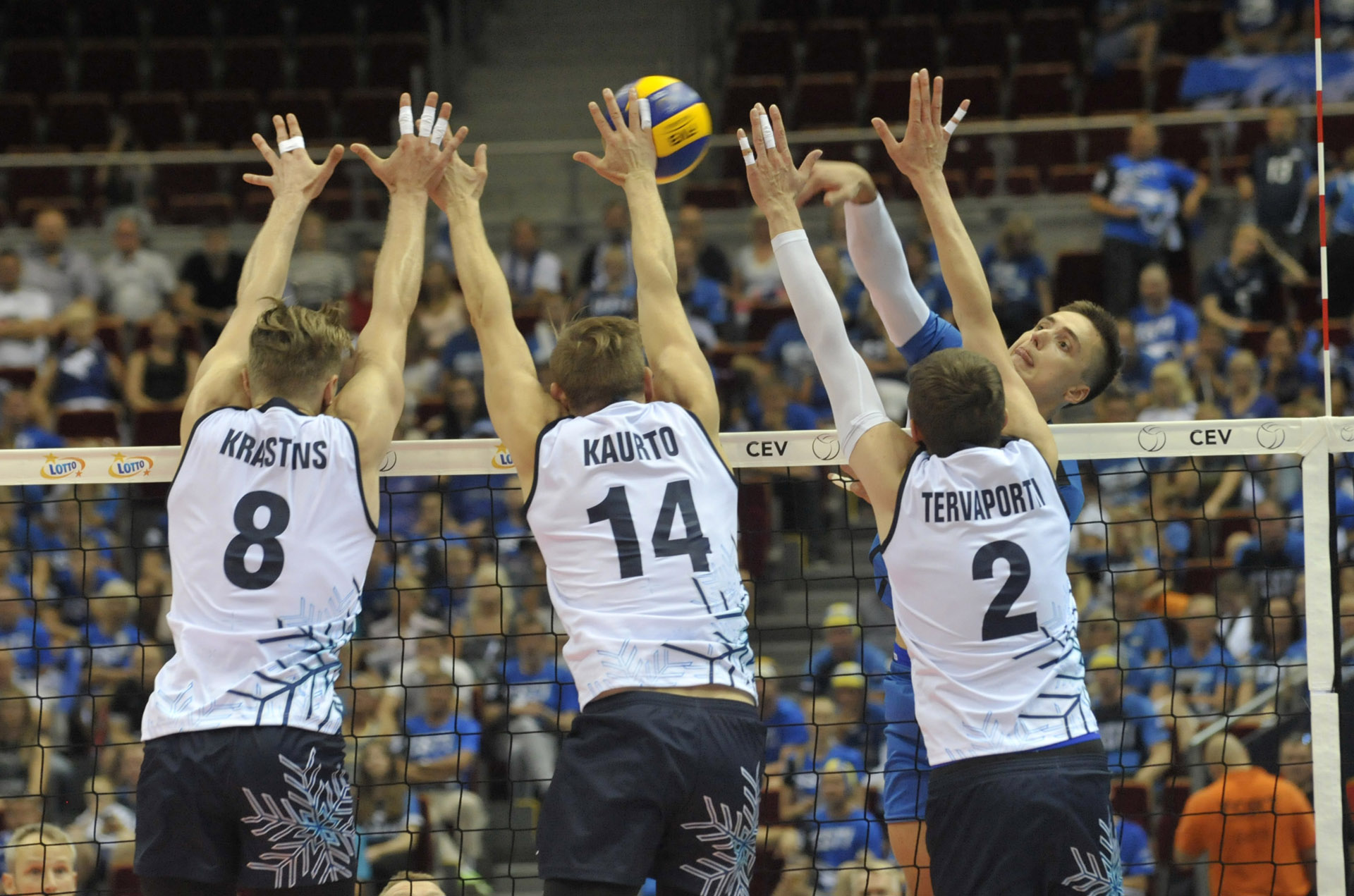 Finland started well in the first set, but could not pull away from Estonia despite leading for most-part. They had the advantage at both of the technical time-outs and were 16-14 up thanks to a great serve from Sauli Sinkkonen. The win was secured by Niklas Seppänen after a great spike at the net, but it was Olli-Pekka Ojansivu’s point-scoring that did the damage as he top-scored with five.

After a teamtalk from coach Gheorghe Cretu, Estonia hit back in the second set and led 8-4 and later 13-11. However, Finland soon got their game together again and went ahead at 19-17. The two were level again at 21-21, but Finland surged ahead and got the job done by winning 25-22.

A topsy-turvy third set went the way of Estonia as they grabbed themselves a lifeline. Finland raced into a 4-1 lead, and led by three at the first technical time-out. The teams exchanged points in the play that followed and were level at 17-all. After that, Finland established a two-point gap, but were once again pegged back to 23-23. A challenge call went in Finland’s favour to give them match point, but they failed to take it and Estonia managed to come from behind to prevail 27-25.

Finland collapsed in the fourth set and let Estonia run away with things. They were 18-11 down and Robert Täht continued to score highly for Gheorghe Cretu’s team as he put points on the board. Finland closed the gap, but Estonia forced the first tiebreak of EuroVolley by winning 25-22.

In the final set, Finland managed to recover after throwing away a two-set lead and led by three at 8-5. They continued to lead thereafter and secured the five-set win with a great kill from Markus Kaurto.

Tuomas Sammelvuo, Finland coach: “We never thought the game was won, it was point-by-point. We always spoke about focussing on every moment. We gave Estonia the momentum and their defence was amazing at the end of the fourth set. We came back towards the end of the fourth set and it was crucial for us to play the fifth like we played. I’m proud of my players because no matter what happens they never give up. It has to be like this for Finland. We have to play as a team. The fans will be big for us against Serbia and Poland. Some of these players have never been to a tournament like this and I hope we remember these moments.”

Eemi Tervaportti, Finland captain: “We started good and our service worked like we planned. We defended well and then maybe after two-and-a-half sets we thought maybe the game would finish in our favour. You can never win easily, we gave them the chance and they used it. In the fifth set we decided that we will not lose. We started playing our own game and it worked.”

Robert Täht, outside hitter of Estonia: “The fact that I scored the biggest number of points doesn’t mean that the rest of the team meant less in the game. Volleyball shows that one or two good sets are never enough. We have quite a few things to improve before the game against Serbia. This will be a tough one but we are ready to step up and fight.”