The main stadium is ready! Last preparations are underway 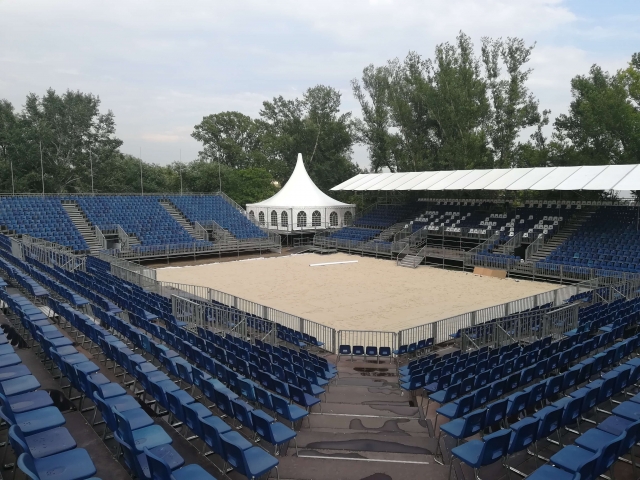 At the Monta Beach Volley Club facilities, preparations for the World Tour Warsaw 2018 tournament are underway. The central facility, the main stadium, is ready. In total, over 3,600 spectators will be able to sit on four stands at the stands.

Four match pitches including the main stadium that can accommodate 3275 spectators and two training pitches - this is how the infrastructure for the World Tour Warsaw 2018 is presented (June 27 - July 1). At the facilities of the Monta Beach Volley Club in Warsaw, last preparations are under way for the next week's beach volleyball competitions - over 120 best world beach volleyball teams - headed by World Tour ranking leaders Piotr Kantor and Bartosz Łosiak. The central point of struggle, the main stadium is ready. Cosmetics are underway at the end of the preparation of the field.

Construction of the facility began at the beginning of June, and after 10 days the main stadium and the pitch were ready. For this purpose, in order to be able to take the form of a tournament object from a real event, about 4500 tons of sand brought by 150 trucks were imported! It is specially imported sand from the mine used, among others in the production of glass. - It is fired and sifted, which means that even at very high 40-degree air temperature, it does not burn feet and does not spoil the comfort of playing. There are not many tournaments on which good sand is used, like the ones on our pitches - explains the press director of the World Tour Warsaw 2018 tournament Piotr Kamiński.

On the VIP stand, the chairs has been installed so that "Poland" stands out in white. With additional facilities, just next to the main field will be set a shower, which will be able to use the players to cool off at very high temperatures.

In addition to the main stadium, which will be the central object, the fans will be able to follow the struggles of the side courts. At one located next to the main stadium there is a grandstand for 250 spectators, and the competition for the other two will be able to track a total of 150 people. This is of course only seating, because fans in all conditions are able to cheer on their favorites. - We are in the process of exchanging sand on side courts for such one that meets all requirements - adds Piotr Kamiński.