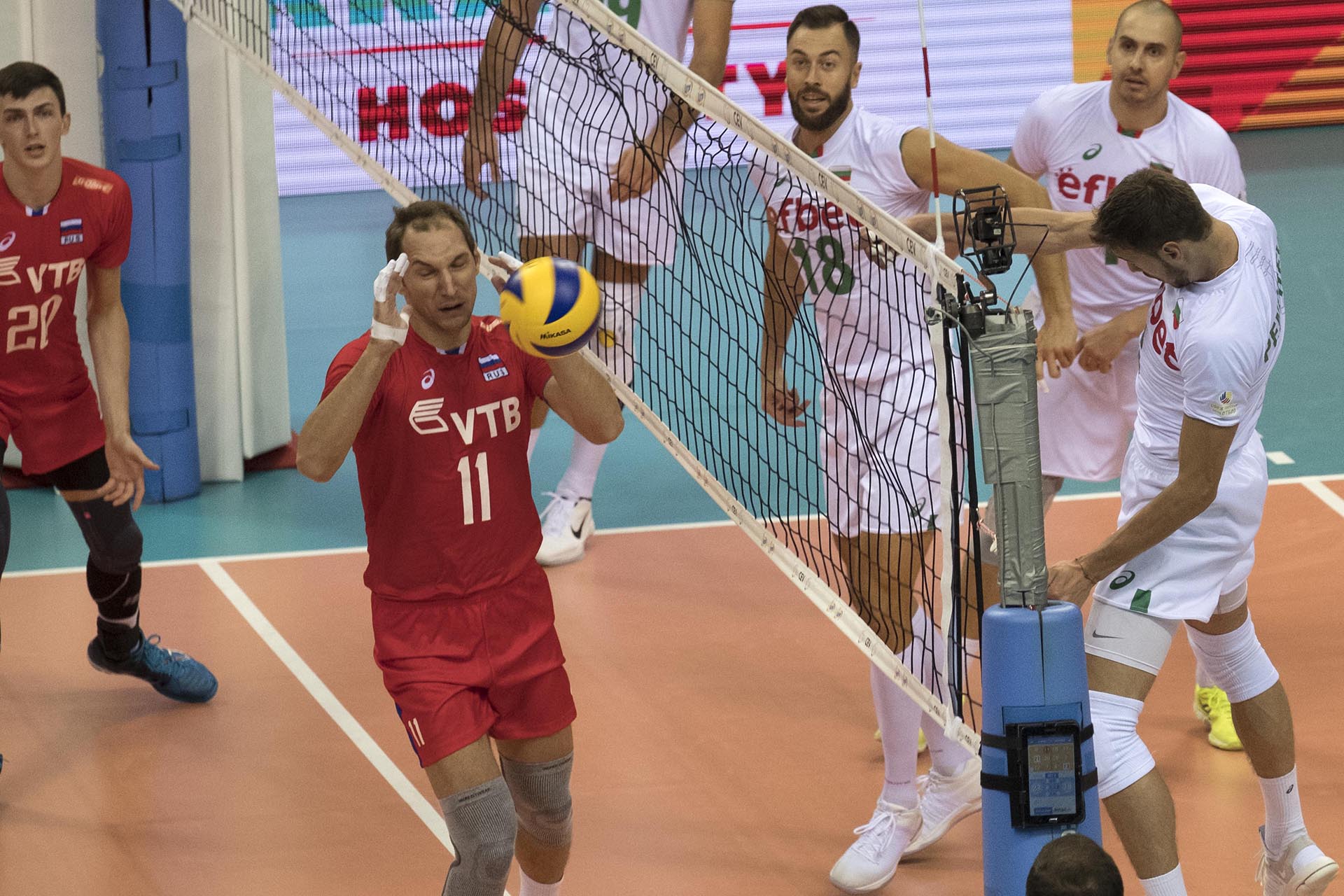 This game was highly anticipated, for both Russia and Bulgaria are said by many to be the strongest teams of Group C. Bulgaria however had hardly anything to say as they were overpowered in most areas of the match and lost this lopsided duel in three straight sets.

Russia began to race ahead right from the beginning of the game, partly due to Maxim Mikhailov‘s difficult serve. Their lead was as big as five points (7-2) but after the technical break Bulgaria started to reduce the gap.  Bulgaria actually took the lead at 20-19 and really seemed to take control of the set but Russia also did not surrender easily and it is they who managed to close out the first stanza with 25-23 on the scoreboard.

Russia seemed to be on fire after surviving some difficult times in the 1st set and again they led by a noticeable margin at the technical break (8-4). Rozalin Penchev gave all his best both in attack and in defense as he fought for every ball but could not bring Bulgaria a tie they needed. Russia used wisely their assets and in difficult situations the setter, Sergey Grankin, played Russian attacks through the middle, where Ilyas Kurkaev and Artem Volvich delivered. As Bulgaria could not come close to their rivals, the set was ended by a Russian block with 25-20.

After the ten-minute break Bulgaria returned to the court with more focus and kept the score close as Nikolay Penchev was showing off his spiking skills. Russia claimed a considerable advantage after a point series caused by Grankin and his formidable serves (17-14). This seemed to break Bulgaria’s spirits as the Russians kept their lead untouched even though Tsvetan Sokolov and Rozalin Penchev attacked furiously and their team desperately tried to regain momentum. Dmitrii Volkov’s ace seemed to deprive Bulgaria of any hope that was left and Grankin’s single block closed out the game with a score 25-19.

Bulgarian opposite Tsvetan Sokolov said: “We had a chance in the first sets but in a couple of plays we weren’t aggressive enough. The teams like Russia never forgive mistakes and destroy the teams that make them. Before our next match everything needs to be better.”

Nikolay Nikolov, Bulgarian middle blocker: “We couldn’t show our skills and all the things we are capable of on the court. One of our main assets is serve but today, just as in World League, it was more of a problem – we started to serve better in the end but it was just too late. Even though Russia played very well in every element of a game I don’t think they were much better than us. They won a couple of decisive points and it gave them a victory today.”

Russia’s coach Sergey Shlyapnikov commented: “In every aspect of the game my players were better than the Bulgarians. We made less mistakes. But we must remember that it’s our opening match of the European Championships. I’m glad of the victory and think that it’s an important first step. My team now will play a difficult match against Slovenia, a surprising silver medallist two years ago. We don’t know what the Spaniards are capable of.”

Sergey Grankin, the captain of Russia: ”The result in this match against Bulgaria is obviously great for us but this success doesn’t guarantee an advance to the playoff phase yet. Personally, I’m satisfied of our level today but maybe coaches and supporters are waiting for more. Our team will now play against Slovenia and we don’t expect it to be easy.”