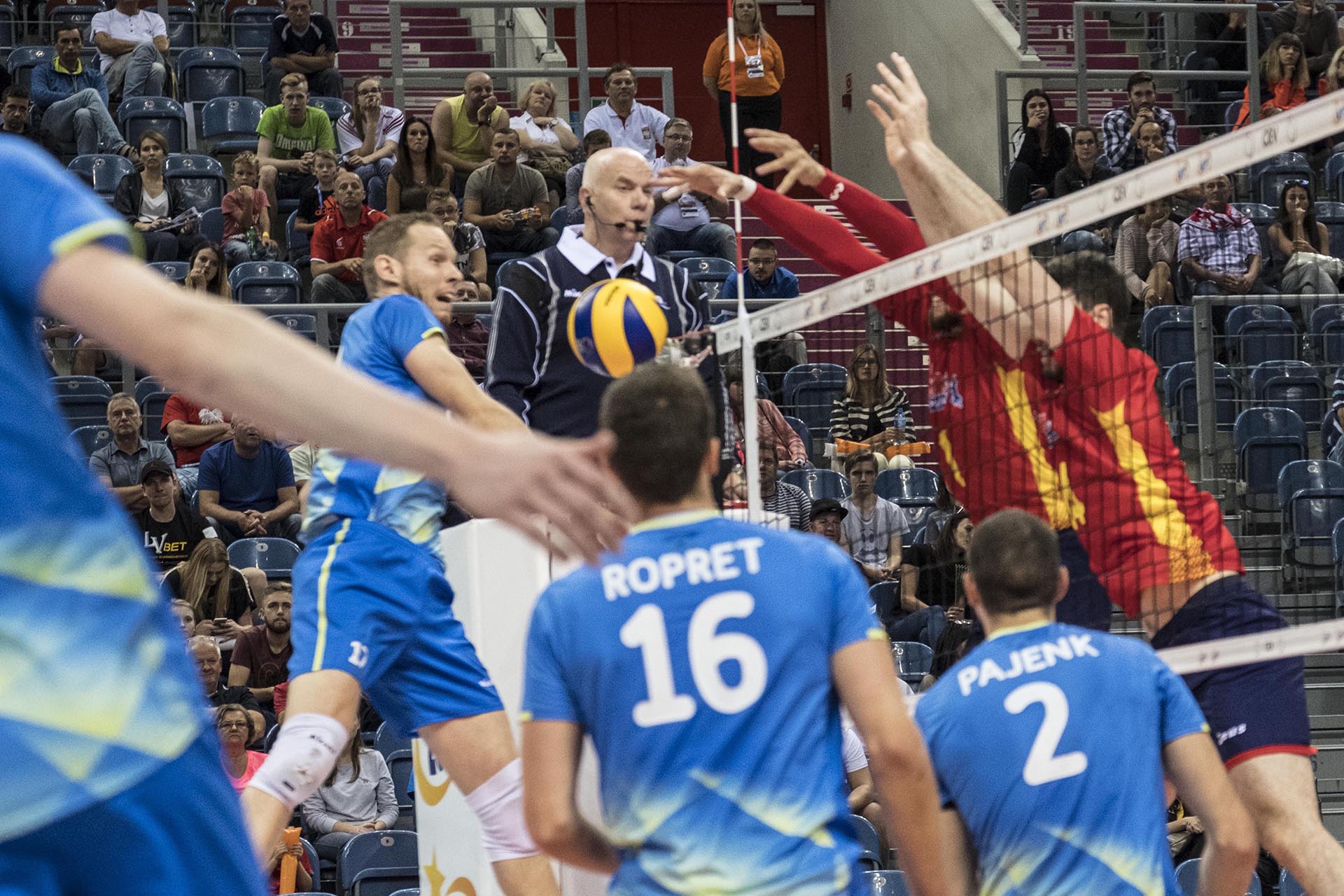 The second game of Group C playing in Kraków featured Spain and defending silver medallists from Slovenia. Underdogs from Spain fought bravely in the first set but they failed to take the chance to win it, subsequently losing 0-3 (25-27, 15-25, 16-25).

Spain showed no respect for their opponent right from the beginning of the match and they managed to pile up a three-point lead at the first technical break (8-5). Slovenia seemed to be a little bit distracted as they struggled both in offence and in defence. Spanish opposite Andres Villena caused Slovenia much trouble but eventually Slovenian block started to function and they cut the deficit to 2 points. Tine Urnaut gave his team a much needed boost attacking from the wing (18-19) and eventually Slovenia tied it all up at 19. Alen Šket paved Slovenia’s way with a couple of kills from the left wing and his crucial ace gave Slovenia their first set ball at 24-23. The set ended with a Spanish fault resulting with 27-25 on the scoreboard.

Slovenia began the second set by racing ahead early and a block by Šket made it 7-3 in their favour. Alen Pajenk’s serve caused a lot of problems for Spain and the point series made the advantage quickly rise to six points (9-3). Spain just could not get back into the match – that’s they why fell more and more behind (9-19). They struggled to find a way to trick the Slovenian block and the lopsided set was closed out by Tonček Štern’s kill (25-15).

Spain tried to keep it close in the third set but Šket’s ace made it 11-7 for Slovenia. Alen Pajenk got a couple of spikes for himself and Slovenia sailed safely to the victory – a block-out play by Šket ended the game at 25-16 and 3-0.

Slobodan Kovač, coach of Slovenia, said: “Start of the European Championships is difficult for everybody. At first it didn’t go well for us because our realisation failed – after a good reception we couldn’t finish the first attack. But then our block and serve pushed really hard. I think we played on a good level and generally I’m satisfied with how my team performed.”

Alen Pajenk, middle-blocker of Slovenia: “We knew it was going to be hard because Spain played very well in the previous championship tournaments. We prepared thoroughly for this game. However, the first set was a little bit hard for us because they fought for every ball. In the second and third sets we just pushed with our serve and block and it was enough to win.”

Spain’s coach Fernando Muñoz commented: ‚”We prepared for this game to start the competition with a victory. We began very well, we were concentrated, we played perfectly in attack. We lost the first set because we gave Slovenia a chance to return to the game. We let our opponents take advantage of our problems with reception. Our solutions just didn’t work. In the next matches we must find our moment, but we know that we will face very strong teams. We must play better during the whole game, not only in the first set.”