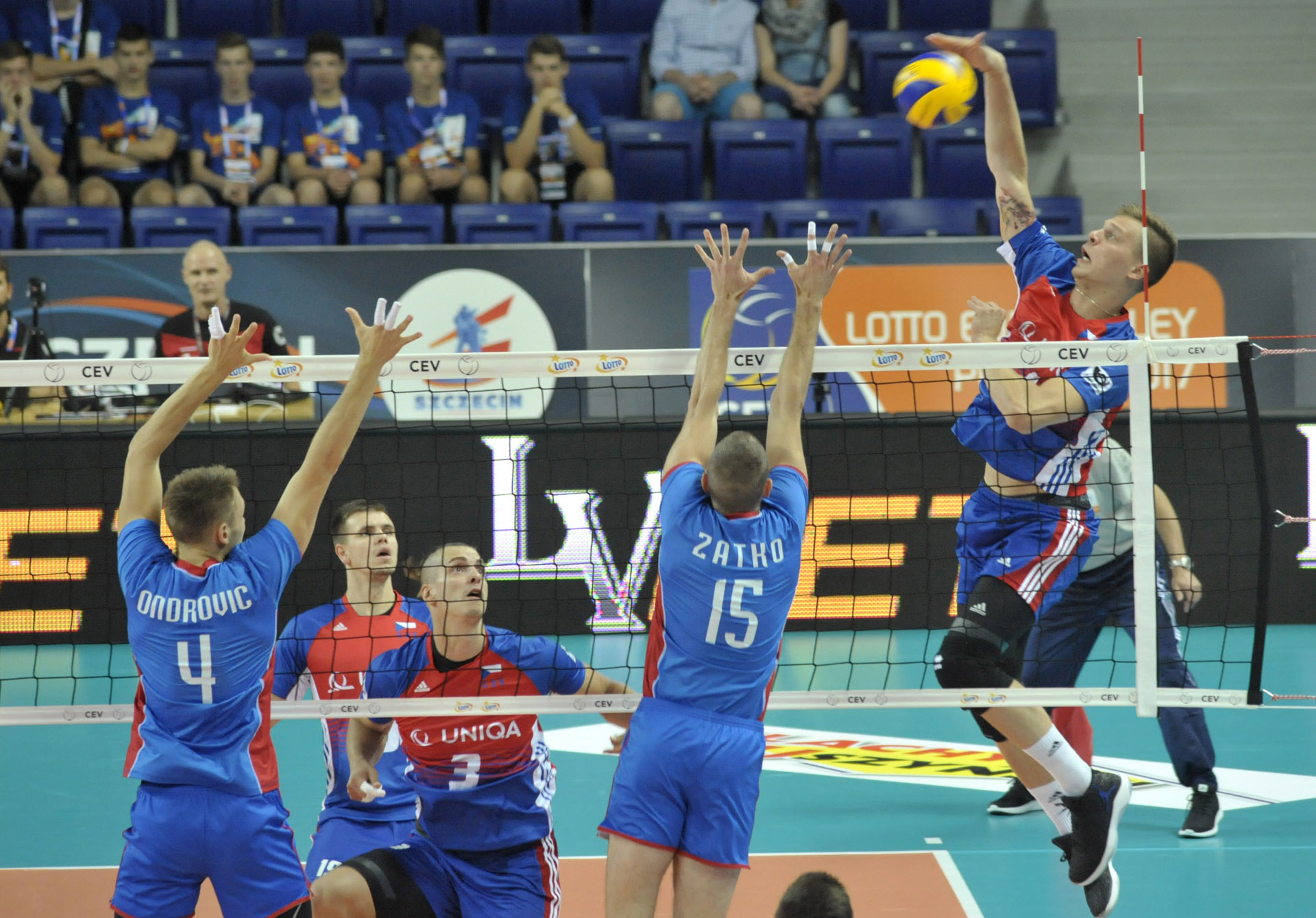 The Czech Republic started the match more concentrated and quickly built up a 10-5 lead. Then Slovakia managed to measure up to their opponents in performance, which was not enough to narrow down the gap. With Donovan Dzavoronok keeping pace and the Slovaks making more mistakes, the Czechs managed to maintain their advantage through the end of the first set – 25-19.

Slovakia responded with a 9-5 breakaway, extended further to 12-6 before the Czechs started mounting a comeback. With Michal Finger on fire in offence, they caught up at 16-16 to prompt a fierce battle with several switches in the lead all the way through a long overtime. In the end, it was a kill block by Slovakia’s setter Juraj Zatko that closed it off at 30-38.

Great overall precision, huge blocking effort and three fiery aces in a row by Donovan Dzavoronok to finish the third set off sums it all up on the way to an impressive 25-16, which gave back the lead to the Czech Republic.

The fourth set was competitive only through 9-9.  Capitalising on the many mistakes of the opponents, the Czechs took control of the scoreboard and ran off with a solid lead. An unforced error on Slovakia’s side fixed the final 25-17 and stamped the victory for the Czech Republic.

Michal Finger was the best scorer of the match, contributing as many as 24 points to his team’s win. Donovan Dzavoronok added 18, while Stefan Chrtiansky Jr topped the charts for Slovakia with 15 points.

Ales Holubec, player of Czech Republic: "The matches against Slovakia are unique to us and we always treat them like a kind of a derby. I am glad that we were able to win because it is a perfect start of the tournament. For several years we had some troubles with winning sets at such events and, this time, on the first occasion we managed to win."

Michal Nekola, coach of Czech Republic: "We started with good reception, so we entered the game and the tournament well. In the second set we made a successful chase, but still we lost our concentration at the end somehow. After the break we got back into the game and won the match, which means we are still in the tournament. This was only the first step. We have many more ahead. It is good that we have a day off tomorrow, because my team need to clear their heads."

Emanuel Kohut, captain of Slovakia: "I have the impression that we lost primarily because we did not present our full potential today. Especially in the first and the third sets we did not attack at 100% and this has brought such results. In training it looked much better and our strikes had a lot more power. For some reason, we could not repeat it during the match."

Andrej Kravarik, coach of Slovakia: "I think that my boys could not play well because of the pressure of a European Championship. We struggled with our serving (23 points lost), we missed the lines while attacking. The Czechs have been playing good Volleyball for a long time, and today they have confirmed it. We will continue playing and I hope the boys will show what they really can do."