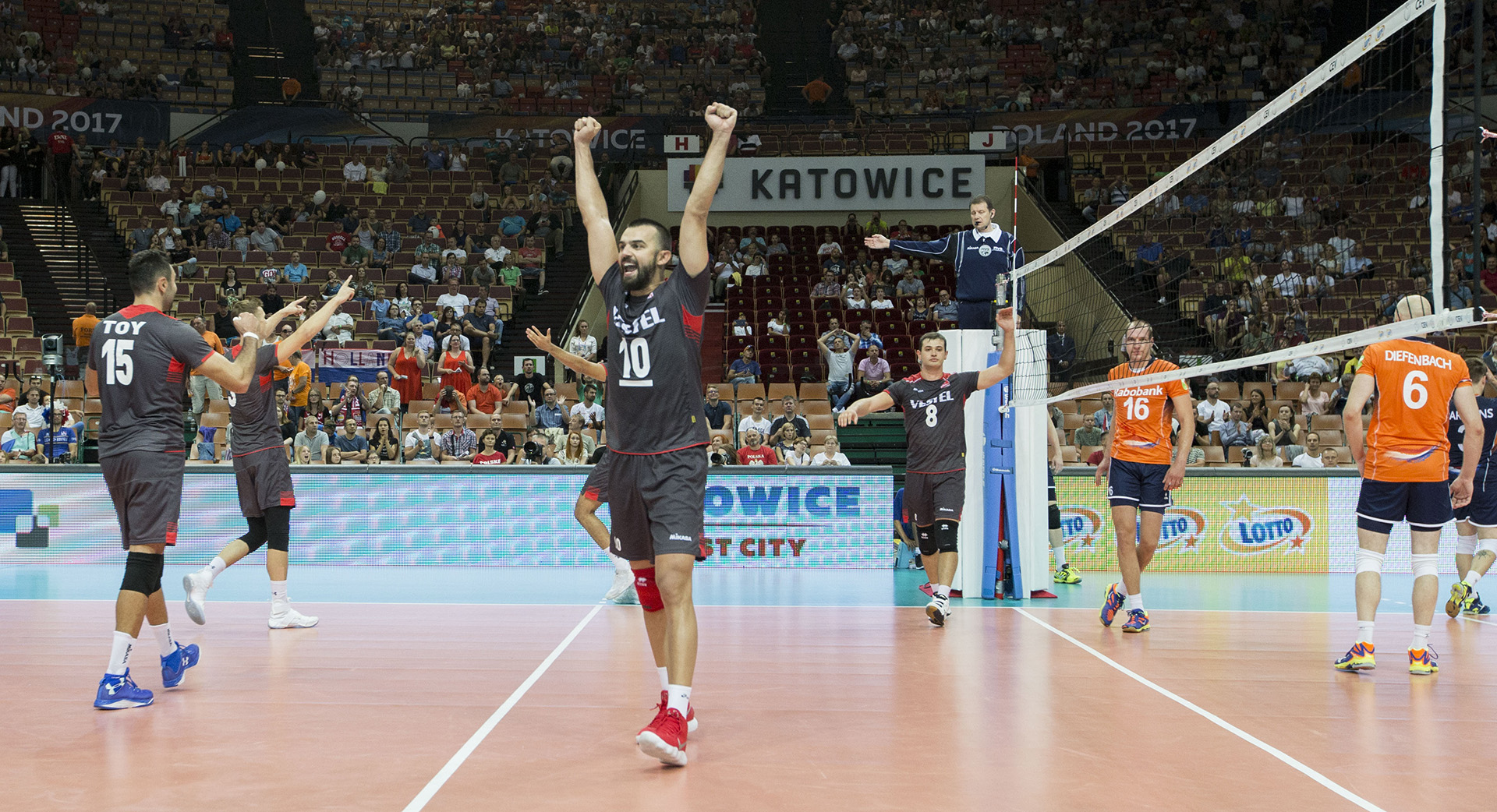 Turkey and The Netherlands, both not mentioned as favourites, fought to ease their way to the next round in the LOTTO EUROVOLLEY POLAND 2017 opener in Pool D in Katowice. The four-setter fully satisfied the spectators gathered in Spodek Arena with some really effective turns, with Turkey taking the first victory 3-1 (25-19, 25-22, 21-25, 25-22) against the Dutch team.

Starting the first set with an efficient block performed by Jasper Diefenbach and Robbert Andringa, the Netherlands opened play in Pool D. Well-played defence on both sides of the court as well as outside hitters doing their job made the game even until the first technical time-out, when the Netherlands jumped ahead by one point. Their advantage grew to three points (11-8) after a fierce attack by Diefenbach. Nevertheless, Turkey didn’t stay behind and a spectacular block performed by Gökhan Gökgöz pushed his team into four points leading at the second technical time-out. The first set was finished 25-19 with an efficient attack through middle by Faik Güneş.

The Netherlands came back into the game, and the first technical time-out took place with just a one-point Turkish lead (8-7). Staying focused and keeping good passing, the Dutch players were able to set and finish some efficient kills by Diefenbach, Thijs ter Horst and Nimir Abdel-Aziz which allowed them to catch up at 15-15. Although a triple block performed by the Oranjes being cheered up by their fans gathered in Spodek Arena put some new hope on the Dutch side of the court, the set was finished 25-22 after the ace performed by Burutay Subasi.

After the ten-minute break, the Netherlands showed a solid block performance. However, it was Turkey who led at the first technical time-out 8-7. The situation changed during the second technical time-out when the Netherlands regained their strength and jumped up at 16-14. Efficient attacks by Wouter ter Maat and his ace service let the Oranjes extend their lead to 20-17 and win the set 25-21.

The fourth set started with the Turkey’s domination. Smart play by Arslan Ekşi put his team five points ahead at the first technical time-out and gave Turkey the opportunity to fully control the game and take a few risks at the service line. Spectacular defences followed by well-kept play at the middle of the net by Mert Matic prevented the Netherlands from gaining contact points easily. The Turkish opposite Metin Toy showed his best and Turkey stayed on the lead 17-14. When their advantage was reduced to one point (19-18), Josko Milenkoski called a time out to help his players keep their focus and win the set 25-22 with an efficient double block.

Jasper Diefenbach, The Netherlands captain: “This was going to be our most important match in this round so it is very, very disappointing that we have lost this match.  We didn’t play our best game. We started the first set with some difficulties. But I can compliment Turkey for their nice game. We made plenty of mistakes, especially in the fourth set.”

Gido Vermeulen, The Netherlands coach: “I think that Turkey played a really good, aggressive game. One of the elements they dominated over us was their attack, which they executed very well.”

Arslan Ekşi, Turkey captain: “First of all we are happy that we won the first match of the #EuroVolley, because our group is so difficult - we are facing reigning European champions France, then Belgium and The Netherlands. We won our first match, but we had a lot of problems in this summer season. All of the players did their best, so we started this competition in a good way. Our next match is with Belgium so we will do our best against them.”

Josko Milenkoski, Turkey coach: “It was a really important match for us and a very difficult one. We are ready and awaiting the next matches.”