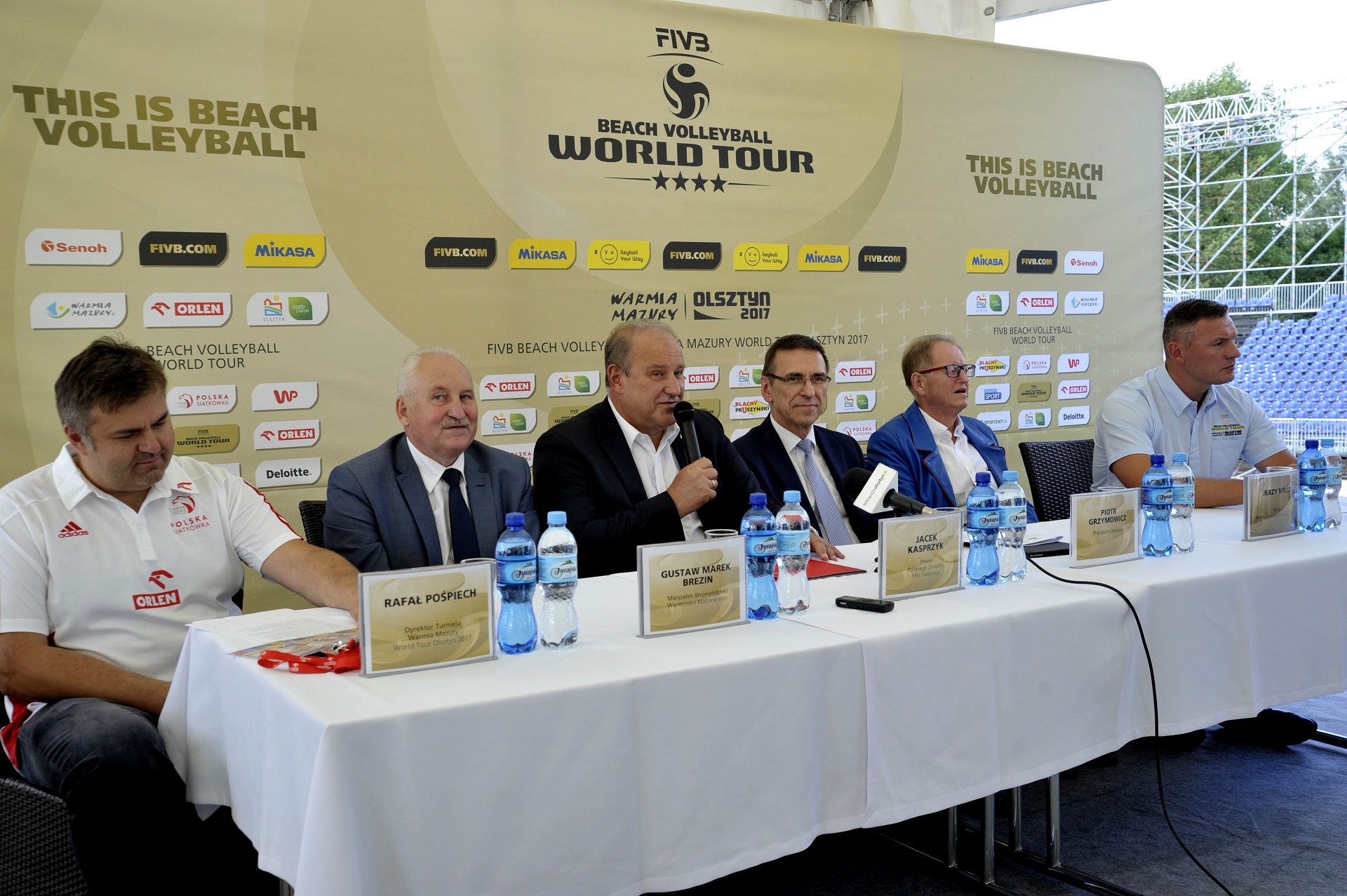 When the FIVB World Tour returns to the courts on the shoreline of Ukiel Lake for the third-straight season, tournament director Rafal Pospiech feels the international beach volleyball event will produce a special atmosphere for the fans.
“More than 100 pairs from 41 countries will play in Warmia Mazury Olsztyn Open tournament,” said Pospiech. “As the World Championships are coming next week, the tournament in Olsztyn will be the final rehearsal for the best beach volleyball teams. We are expecting hundreds of fans from Latvia and Russia who will be part of that special atmosphere at the stadium, where Polish fans will dominate as well.”
Jacek Kasprzyk, the President of Polish Volleyball Federation, said he was “very happy that Olsztyn, once again, acts as the host of this big beach volleyball event. This is a favorable city for volleyball and the Warminsko-Mazurskie sponsorship is also very important for the sport.  One of our men’s team (Piotr Kantor/Bartosz Losiak) has reached three FIVB podiums this season, so we hope for more success this weekend along with our women’s teams.”
Piotr Grzymowicz, the president of Olsztyn, said the FIVB World Tour “is a great promotion for our city and the event creates great media are interest.”
Gustaw Marek Brzezin, a provincial marshal of the Warminsko-Mazurskie Voivodship, said that “I’m looking at the main court and I feel the atmosphere from the last tournament. The sport is a great promotion for our city and our region. Polish teams which compete in this tournament are great advertisement of Poland or Warmia and Masuria region. I wish all of players great results and effective preparations to the World Championships.”
Jerzy Mróz, the president of Warmia-Masurian Volleyball Federation, said “the weather in Olsztyn is great as always, and we are surrounded by this beautiful Ukiel Lake.
Pawel Papke, a member of Polish Volleyball Federation, said “as a citizen of Olsztyn, I am extremely happy that the FIVB World Tour will take place in my city again. After the Rio Olympics, many teams have changed and it happened in a Polish team as well. Experienced players work with younger teammates. That helps them to improve their skills and to make the competition tighten. We are expecting Bartosz Losiak and Piotr Kantor to play well. It means that all the best Polish teams will play in Olsztyn before the European and World Championships.”
Kinga Kolosinska, who competed in the Rio 2016 Olympic Games with Monika Brzostek, said the “tournament means a lot to me after I placed third in Olsztyn two years ago. Now I play with Jagoda Gruszczynska, because Monika gave birth to a son last week.”
Jakub Szalankiewicz, a Polish FIVB youth world champion, said “we travel a lot around the world to play many different tournaments and we miss Polish fans. That's why we hope they will make a great atmosphere in Olsztyn.”
Mariusz Prudel, a two-time Polish Olympian, said “the tournament in Olsztyn is a great reunion of our beach volleyball family. There are more and more teams competing at a high level and this year’s event will feature the world's best players.”