Germany edge Russia in tiebreak to cause first #EuroVolleyW sensation 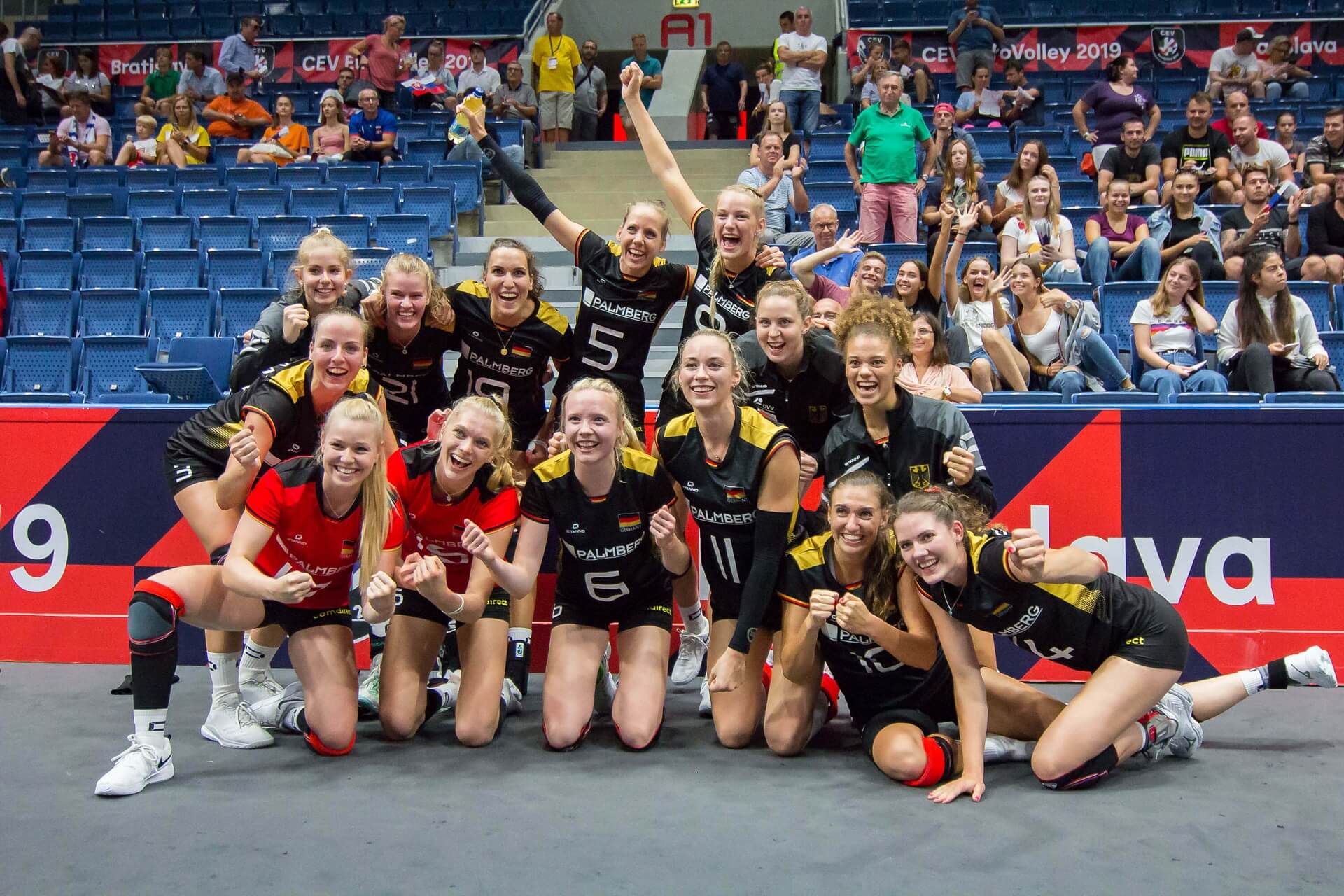 Germany were responsible for a major sensation on the fourth day of competition as they beat Russia 3-2 in the CEV EuroVolley 2019 Women Pool D in Bratislava, Slovakia. Reigning World and European champions Serbia, co-hosts Turkey and Poland, as well as Italy and the Netherlands all boast an immaculate record of three wins in as many matches to assert their leading role as well as their credentials to vie for the top honours of the continental showpiece event. Hungary, on the other hand, had to accept a heavy 0-3 loss at the hands of Azerbaijan despite the support provided by 2,500 fans at Papp Laszlo Sports Arena in Budapest. Slovakia, on the other hand, celebrated their third triumph in Pool D to secure their spot in the 8th Finals – a historic achievement for the country in women’s Volleyball.

•    Titleholders Serbia dropped a set in their matchup with France but still keep an immaculate record in the competition with three wins in as many matches and maximum nine points.
•    Despite not playing for half of the match, their star players Tijana Boskovic and Brankica Mihajlovic were the top scorers of the game with 14 points apiece. France’s outside hitter Manon Moreels sustained an injury – she eventually went to hospital to assess the severity of it.
•    Co-hosts Turkey emulated Serbia to secure their third straight victory as well, even though they dropped a set as well in their fixture with Bulgaria.
•    Bulgaria are still winless and they have to fight their way back strong if they are to qualify for the elimination phase.

•    Italy looked just dominant in their matchup with Belgium’s Yellow Tigers, cruising to a 3-0 victory – the same result they achieved earlier this month at an Olympic qualifying event held in Catania.
•    The ‘Azzurre’ are yet to concede a single set in the competition – the only team to boast such a record together with the Netherlands.
•    Poland had a rocky start to their match with neighbours from Ukraine, but eventually regrouped to secure a 3-1 victory – and share with Italy the same record in the pool, with three wins in as many matches. However, Italy keep the top spot of the tables by virtue of their immaculate set record.
•    Poland’s star opposite hitter Malwina Smarzek-Godek put an impressive tally of 26 points to her name.

•    The Netherlands, just like Italy, are yet to lose a set and on Monday the ‘Oranjes’ resumed their EuroVolley campaign with a 3-0 shutout of Croatia.
•    The rising star of Dutch Volleyball, Nika Daalderop, stood out with a personal haul of 15 points, well supported by the more experienced Celeste Plak (14) and Robin de Kruijf (14).
•    Co-hosts Hungary suffered a shocking 0-3 loss to Azerbaijan and this combined with their setback in the ‘derby’ with Romania turns their journey towards the elimination stage of the competition into a mountain to climb.
•    Even though the first and third sets were rather close, Hungary could not find a way to stop Azerbaijan’s superstar Polina Rahimova, who scored 22 points on her own.

•    Germany was responsible for the sensation of the day as the ‘Schmetterlinge’, aka the ‘Butterflies’, beat Russia 3-2 despite losing two sets where their opponents looked absolutely dominant.
•    It is a truly amazing result for the young team coached by Felix Koslowski, especially knowing that earlier this month Russia qualified for the Tokyo 2020 Olympics as only one of three European teams to achieve the feat.
•    It was a real drama in Bratislava, where hosts Slovakia emerged victorious from a five-set match with Belarus after coming back from two sets down, thus securing their spot in the knockout stage of the tournament.
•    It is the first time in history Slovakia achieve this feat at EuroVolley Women, where they had never made it through the pool stage since the breakup of the former Czechoslovakia in 1993.