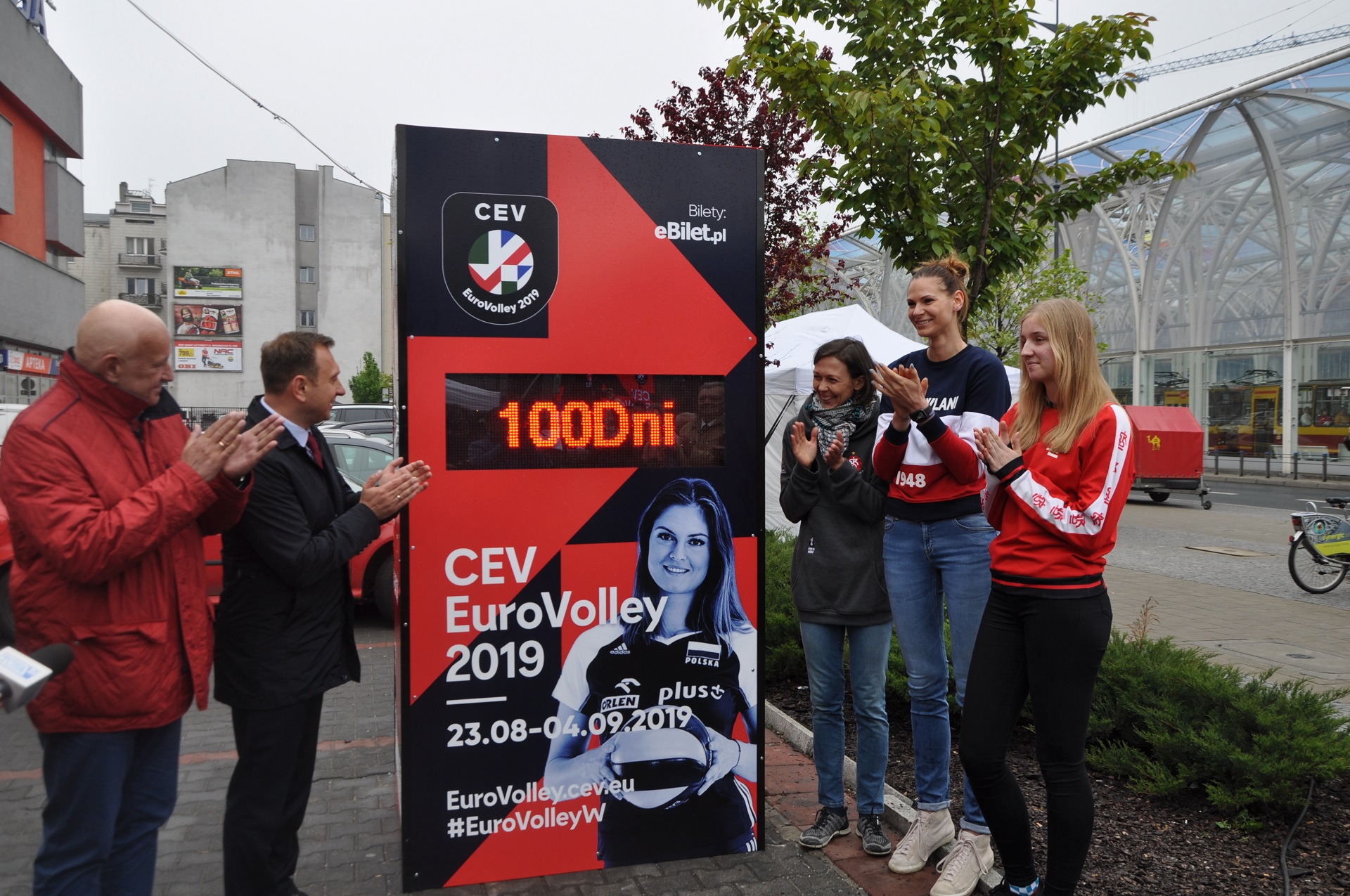 One hundred days before the start of CEV EuroVolley 2019 Women, a special clock counting down days and hours to the premiere European tournament was launched in the centre of Łódź.
Just as it was a couple of decades ago, Łódź has once more become the capital of women’s Volleyball. It has reclaimed its throne this year, and the level of Volleyball played in the city is a proof of that. “I am therefore very pleased that EuroVolley is going to be played here and the 100 days left to the event will be counted down by this symbolic clock,” said Jacek Kasprzyk, President of the Polish Volleyball Federation.
The device was set up in the very centre of the city, at the crossing of Piotrkowska Street and Mickiewicza Alley. It is one of the elements of the promotion of women’s EuroVolley, which is set to start on August 23 in four countries: Turkey, Poland, Hungary and Slovakia. PVF President is expecting that the Polish part of the event will be an organisational success – and he hopes for just the same in terms of the home team’s result.
“I hope that we will once more stun the world with our fans and that the tournament in Lódź shall be played in front of a full house of spectators. It is for them that we organise all of our events. I also hope that our team does well in the competition. Last night, in their first match of the Montreux Volley Masters invitational tournament they beat Japan 3-1 and I hope this bodes well for the whole season,” said the PVF President.
He also added that he strongly believes that coach Jacek Nawrocki’s team will successfully battle through the initial phases in Łódź and eventually travel to Turkey, where the fight for medals shall take place.
Tomasz Trela – Deputy Mayor of Łódź pointed out that when Łódź applied to be a host of the European Championship, very few expected that the tournament would be played in the city of both the Polish Champions (ŁKS Commercecon) and Vice-Champions (Grot Budowlani).
“This is the final proof that Łódź is starting to build a monopoly in Polish women’s Volleyball. I wish to all the fans and to myself to see our national team’s players follow the footsteps of our ŁKS girls and win their European Championship as well,” said Mr Trela.
The event would not have been complete without the representatives of the two mentioned teams. ŁKS Commercecon was represented by Marta Wójcik and Natalia Dróżdż (U15), Grot Budowlani by Gabriela Polańska.
As many as 19 EuroVolley matches will be played in Łódź, including 15 pool phase matches, two 1/8 finals and two quarterfinals. The women’s EuroVolley will begin on August 23 and finish on September 8. For the first time in history, as many as 24 national teams will fight for the European crown in four host countries.
For further information, visit the official event website http://eurovolley.cev.eu.