Bulgaria power past Slovenia into 2nd place in Pool C 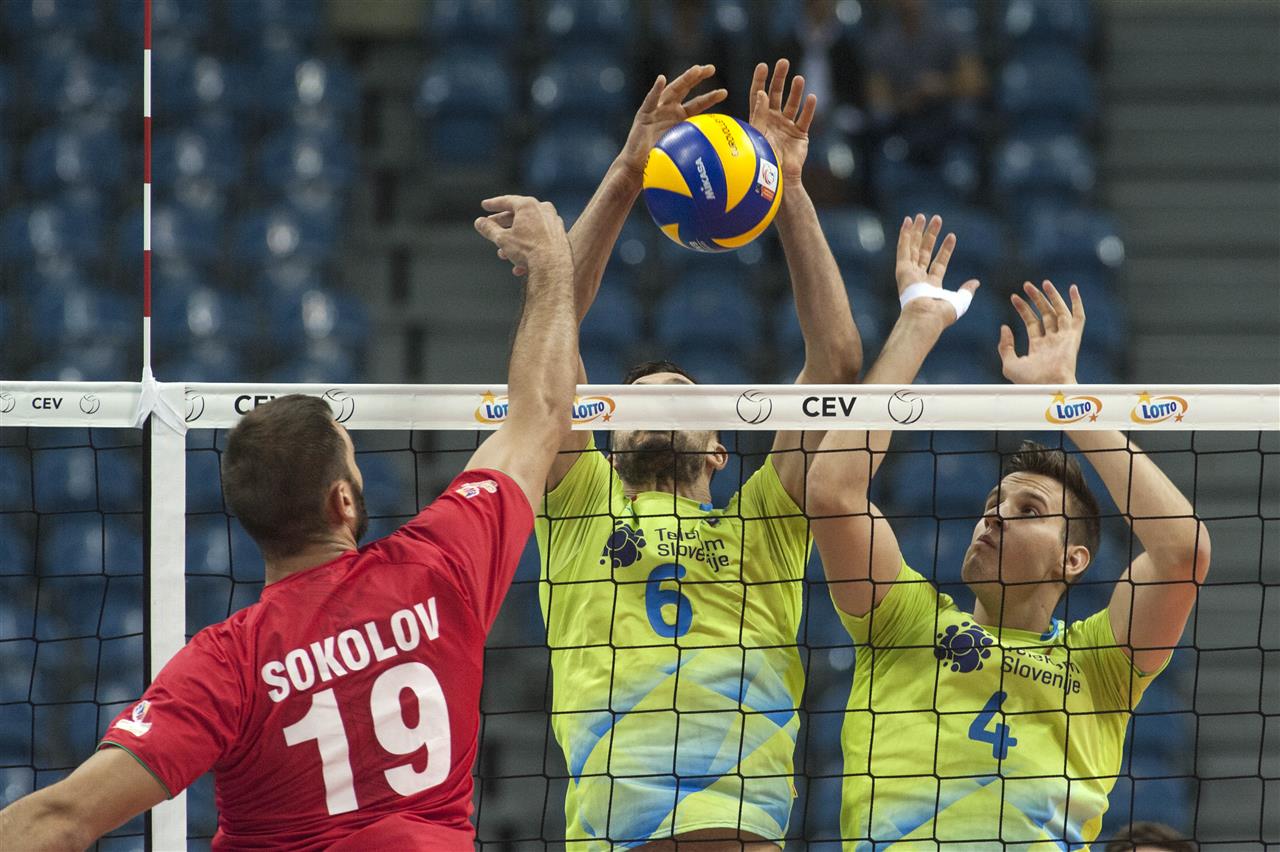 With LOTTO EUROVOLLEY POLAND 2017 well underway, Monday was the day to decide the final pool standings.  In the first game of the day at TAURON Arena Bulgaria battled Slovenia for second place in the group, therefore hopefully avoiding the home team of Poland in the play-off phase. After two close sets, and a third in which they dominated, Bulgaria eventually came out on top and won the match 3-0.

Slovenia had much to be happy about, for their regular opposite, Mitja Gasparini, came back into the starting six after missing two previous games because of an injury. In the beginning of the first set neither team was able to obtain an advantage bigger than two points. The course of this part of the match appeared to be due to some nervousness that was visible on both sides of the net, which resulted in many unforced errors. Nikolay Nikolov nonetheless managed to get an ace after numerous poor serves by his team to make it 16-14 in favour of Bulgaria. A triple block even raised the lead to three points and Bulgaria seemed a little more comfortable and they did not let Slovenia come back until 24-19. Then Gasparini with his powerful performance on the serving line gave the Slovenians a chance to win three rallies in a row but Tsvetan Sokolov’s spike ended the set at 25-22.

Coach Kovač’s team started the second set on a high gear and raced ahead to 6-3 with much help from Gasparini who looked a lot more confident than earlier and more or less kept the margin untouched at three points until Bulgaria began to raise their heads and their towering triple block eventually gave them a slight advantage at 11-10. Both sides played far more freely as the lead was taken back and forth right to the end of the set when Slovenia fought ferociously only to lose the overtime 26-28 after Nikolov’s single block.

Slovenia completely surrendered the third set, with an ace of Bulgarian captain Viktor Yosifov making it 11-4. Then the Slovenians showed some signs of waking up and won three rallies in a row but they did not go any further as Bulgaria sailed safely to a 3-0 win. The game ended with a Daniel Koncilja’s service fault at 3-0 (25-22, 28-22, 25-17).

Tsvetan Sokolov again was the leader of the Bulgarians with 21 points, while Gasparini scored 9 for Slovenia.

Bulgarian middle blocker Nikolay Nikolov: “The match was great, when you win 3-0 always the feeling is like happiness as we needed this victory after our bad start.  Also against Spain we did not do so well, so we needed to show we can play really good Volleyball. It does not matter who we play in the Playoffs as if you want to be a strong team, if you want to be first, you have to beat everyone.”

Slovenian coach Slobodan Kovač: “I don’t know where the key is. After the game against Russia I told my players to believe because they were able to play on the same level as a very strong team. Today the situation was the same – in the first set we had a two-point lead four times, we had chances to make it three, four – we made some, as I call it, “impossible mistakes”. We had some counter-attacks that needed just to be finished and we didn’t do it. I think that we are afraid to win.”

Slovenian opposite Mitja Gasparini: “Maybe we didn’t give them, but we “half-gave” them, the second set because we had a chance and didn’t take it. Then, the third set was a little bit terrible, for our attack didn’t work from the start right to the end and we were struggling. They served really hard, so it was difficult for our attackers to score.”