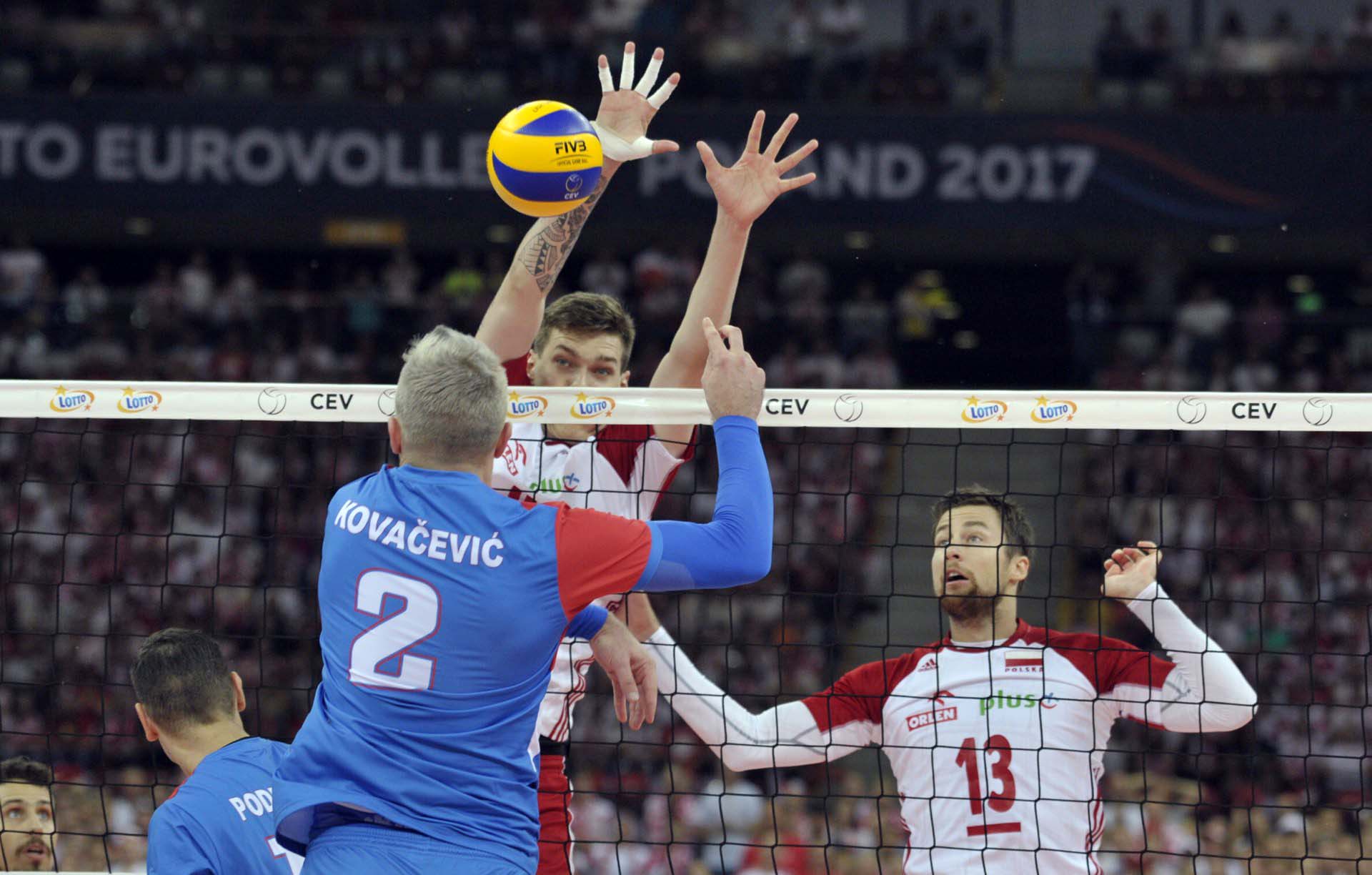 Serbia silenced 65,407 fans on a historic night for European Volleyball – as the visitors stole the show from hosts Poland to start their EuroVolley campaign in Pool A with a resounding 3-0 victory (25-22, 25-22, 25-20) to make amends for the heavy loss they had suffered three years ago at PGE National Stadium in Warsaw. The support from a record-breaking crowd was not enough for the Red-and-Whites to deliver a consistent performance – and Poland will have to erase memories from this game when playing Finland and Estonia in Gdansk in their remaining matches in Pool A.

Anyone sitting at PGE National Stadium could not resist but get goose bumps in such a terrific ambiance – with that red-and-white ‘triumph’ reaching its climax when more than 65,000 people in attendance sang Poland’s national anthem a cappella to account for another spine tingling moment in a truly memorable night for European Volleyball.

The crowd had something to celebrate right at the very beginning of this historic match with Bartosz Kurek scoring an ace before the hosts claimed a three-point lead at the first technical time-out. Serbia, however, came back after the break and found the right solutions to stand the demanding challenge of playing before such knowledgeable, yet partisan audience. Serbia looked determined not to experience another setback after their tough 0-3 loss at the hands of Poland in the opening match of the 2014 World Champs at this very same venue. Despite the many attempts made by the Red-and-Whites to make up for their deficit, which revived the spirit of the crowd, Nemanja Petric sealed a 25-22 win for the visitors.

Poland obviously regrouped during the break as they stormed to an early 5-2 lead in the second set and shortly held on to it (8-5). The noise made by the Polish fans just got louder as the organisers had prepared special actions to involve the audience at every break – but back to the game, Serbia closed in in what seemed to be a repeat of the first set, eventually making it 10-all after finishing off a spectacular rally. Serbia’s block looked solid as a rock – and as Poland seemed to get back on track with an ace by their captain Michal Kubiak, a challenge overruled the initial decision by the referee to propel a 22-20 lead for the visiting team. Poland fought back to 22-23 but Serbia doubled their lead in the match (25-22) to silence the Polish crowd for a second time.

The game resumed after a 10-minute break and Poland had a mountain to climb to avoid a disappointing start to their #EuroVolley campaign. Despite the raucous support from the crowd, the hosts trailed early in the third (3-5) as well, and the fans passionately made an extra effort to boost the morale of their team when head coach Ferdinando De Giorgi stopped the game by the score of 13-10 for Serbia. The visitors, however, widened their advantage to five points at 16-11 – and at this point, a little miracle was needed to prevent Poland from suffering a heavy loss. The hosts fought back to 18-all – and the audience finally had something to cheer about, with 65,000+ fans cheering for the ‘Biało-czerwoni’ as loud as they could. Serbia, however, showed no mercy – and nerves of steel as well and for the third time silenced the crowd – this time once and for all by cashing a resounding 3-0 victory to start their #EuroVolleyM campaign in emphatic style.

Michal Kubiak, captain of Team Poland: “I would like to thank all the people who have organised this event and all the fans, who made sure that we will never forget this day. The reality is that we lost this game and Serbia deserve our congratulations, because they simply played better. However, this loss does not affect our chances for the rest of this tournament, even if it did not start the way we wished it to be. We all hope that in Gdansk we will achieve better results.”

Ferdinando De Giorgi, Poland coach: “I would like to congratulate Serbia, because they played at a very high level and certainly deserved this victory. I would like to thank all those who have worked for this great show, something truly incredible for European and world Volleyball. Serbia played very well and they used all of their assets. We did not give up, but in the most important moments of the match, we did not use our chances. We have the opportunity to improve the level of our game in the next matches. Nevertheless, we keep our heads up and we want to approach the next match with the right confidence.”

Dragan Stankovic, captain of Team Serbia: “This is a huge victory for us. However, it is just the first match of the tournament and we need to look ahead and remain focussed on the next ones. We played good Volleyball, but we can play even better and I hope that we will raise our level of play throughout this championship. It was hard to play in front of 65,000 fans, who were all cheering for the opposition. Poland started very well, but I think that a crucial moment came in the middle of the first set, where we were down by three points; we did stick together as a team and we managed to change the course of the game. A 3-0 victory is a very good result but we will try to forget it for a moment and focus on the next opponent.”

Nikola Grbic, Serbia coach: “Yesterday I said to my players that they had to concentrate on what happens on the court, everything else doesn’t matter. I told them that emotions were the only difference between experienced players, who had already performed under such exceptional circumstances before, and the younger ones. They all had to deal with the same pressure – the pressure stemming from the result, or the importance of the match. A younger player is sometimes overwhelmed by the importance of such a match and by the crowd and he ends up losing concentration. I am extremely happy with the way my players coped with the situation. The result and quality of our game is just the consequence of that. I realised that my players were ready when looking at them in the locker room. There nobody was laughing, speaking about something else, listening to music and that was a very good signal for me, because I knew that they would play well. The result is something else, but the approach to the game was good. I am satisfied with their performance, concentration and the energy they showed on the court. This is our strength and we can beat any opponent thanks to this asset. However, now we have to focus on the next match, somehow forgetting this amazing game.”