Belgium down France in their first #EuroVolleyM Pool D match 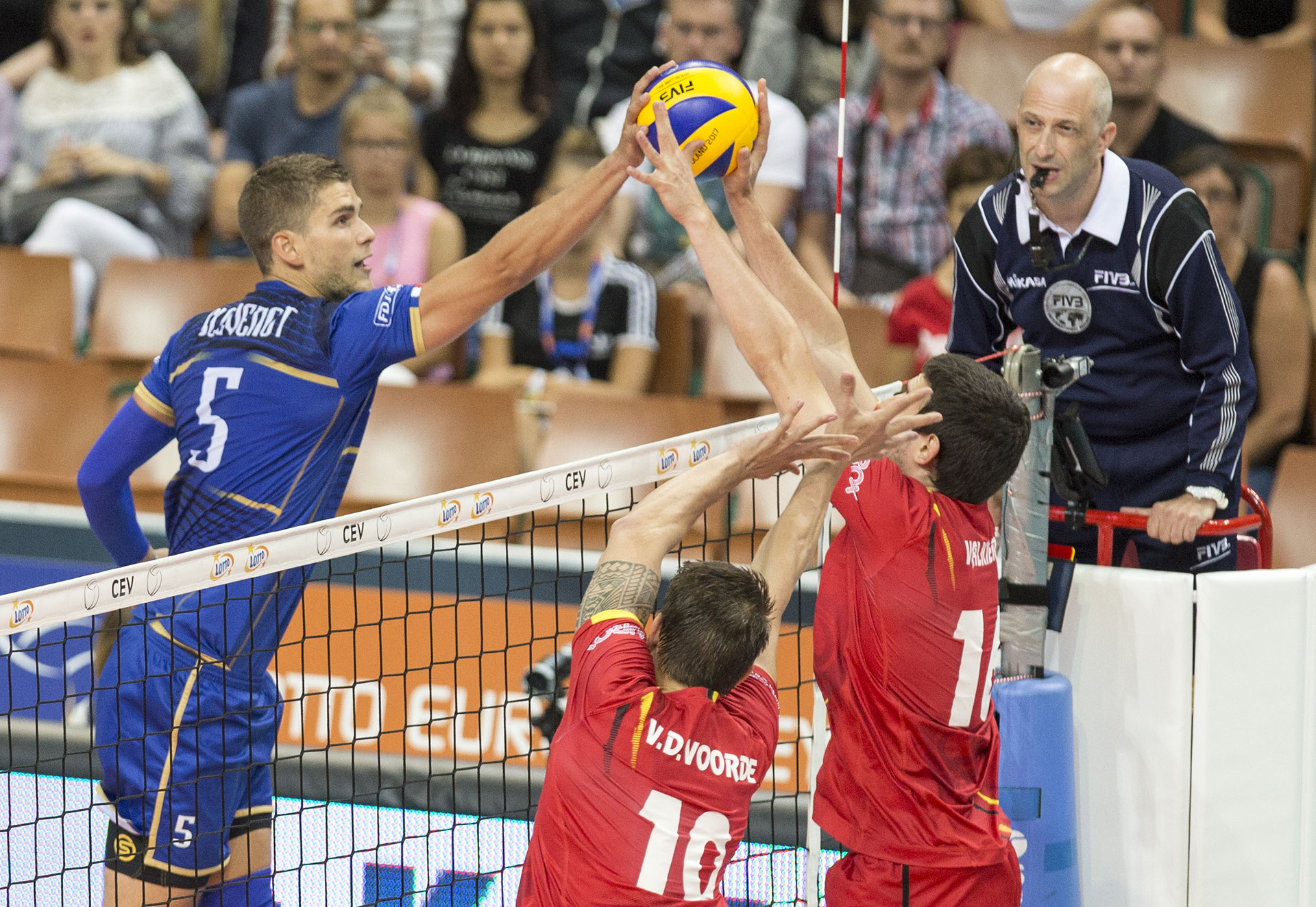 The match began with an exchange of long rallies as both teams fought well in defence. After some efficient spikes performed by Sam Deroo and Tomas Rousseaux, it was Belgium who gained four points leading (9-5). Trying to find the answer to the opponents’ strength, France run their block by Kevin Le Roux and Benjamin Toniutti followed by a fierce kill by Stephen Boyer, bringing three-coloured two points to their chase. Quite unexpectedly, Belgium led 16-12 at the second technical time-out and were able to win a tough ending 25-22 after a fierce middle spike by Bram Van de Voorde.

An even beginning of the second set was caused mainly by mistakes on both sides. At 5-5 Trévor Clevenot performed a middle kill which put France 6-5 ahead. With an ace served by Kevin Le Roux, France caught up at 10-10. Well kept passing and defence on both sides let the spectators see many long rallies with fierce kills. Double block by Julien Lyneel and Kevin Le Roux put France 16-14 ahead at the second technical time-out. Two time-outs called by Vital Heynen - the second one after Lyneel’s ace - didn’t help Belgium to regain the strength and it was France who won this part 25-23.

After the great performance in service, France run to 6-2 leading in the third set. Despite Belgium tries to earn more points with Tomas Rousseaux’s spikes, it was France who led 8-4 during the first technical time-out. Nicolas Le Goff’s kill helped three-coloured to keep the four points lead (10-6). Catching up at 12-12 Belgium forced Laurent Tillie to call a time out. This didn’t help much and after Lyneel’s long shot Belgium run one point ahead (13-12). Mostly due to Bram van den Dries and Pieter Verhees’s spikes, Belgium managed to stay focused and win the set 25-21.

Playing with some pressure in the fourth set France tried to show their power from the very beginning, but Belgium stayed focused and didn’t let the opponent run ahead. After fierce middle spike by Thibault Rossard, France managed to jump up to 4-3 and extended the leading to two points at the first technical time-out (8-6). With good performance from the service line Le Roux helped his team to jump 13-9 ahead. Despite trying to improve their passing, Belgium didn’t have arguments to stop France who finished the fourth set 25-23.

Tie-break started with Belgium leading 4-1. It was Le Goff and Clevenot who tried to change the score for the French side. Belgium eventually stretched the leading to 8-5 at a technical time out. The team kept control, maintaining the advantage until their victory at 15-12.

Benjamin Toniutti, France captain: “Team Belgium deserved this victory. We have played badly and we have suffered in this match. We did not enter this tournament as we have wanted. Tomorrow we’ll have to train and work hard because we need to win on Sunday.“

Laurent Tillie, France coach: “Right now medal is very far ahead of us, but it was just the first match. We played with a very good team, which caused us a lot of problems. We lost our rhythm throughout the match and they played with enthusiasm and much more consistency in block. We have to find back our pace. Our situation in pool D is now much more complicated and we have to win on Sunday if we want to think about medal.”

Bram Van Den Dries, Belgium opposite: “We played very well today in all elements. We believed in the final success from the start until the end, we didn't give up even when we were a few points behind France, like for example in the 4th set - we fought for each ball. We like to play against France, usually we performed really well in these matches.”

Vital Heynen, Belgium coach: “I'm really happy not only with the win, but also with our performance today. Our win is more than a surprise. I think nobody, even we, expected that we can defeat French team - the big favour to regain the title. We won the first set and we felt that we can achieve a good result today, that everything is possible. Today we played well in block and defence. It was a hard and long match so I'm happy that now we have a day off and we can prepare well to the next game against Turkey.”