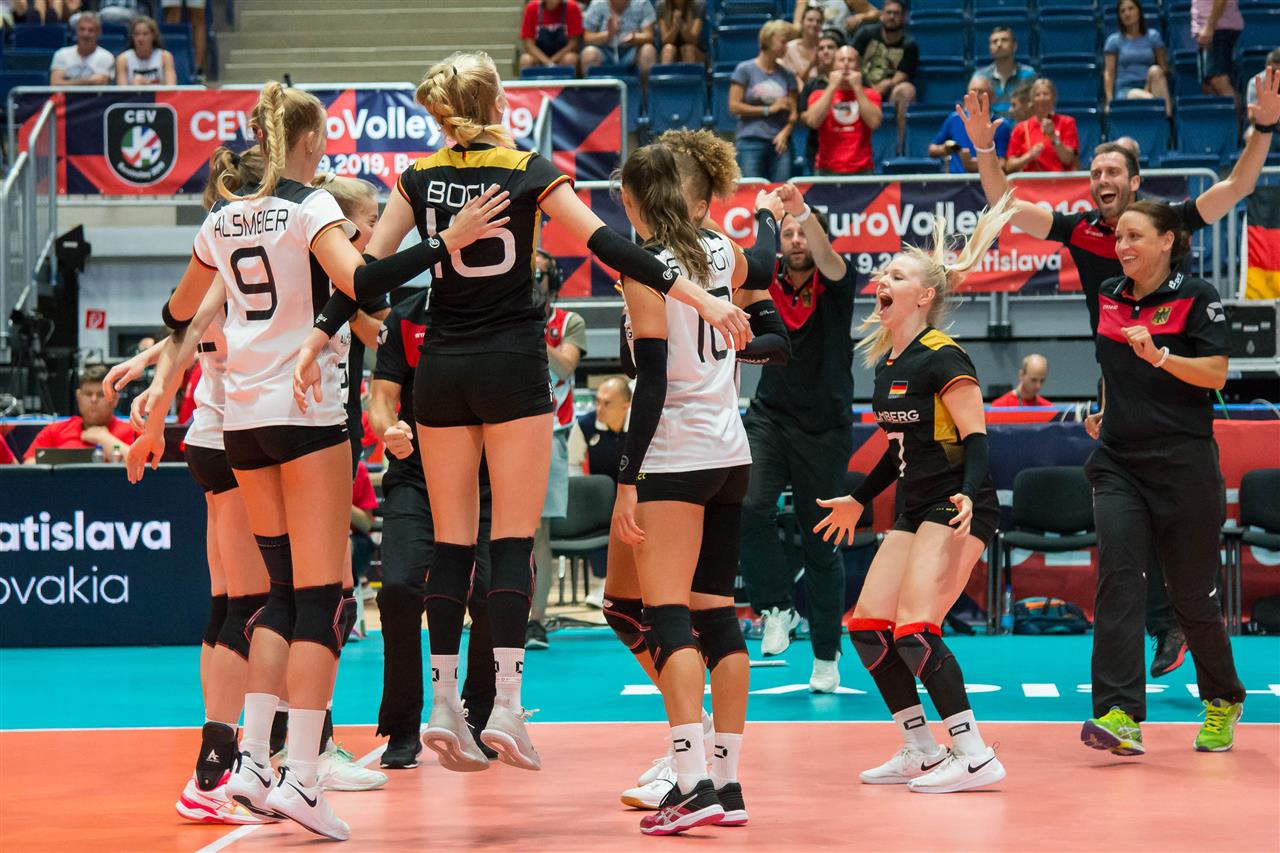 Germany are the first team to complete the group stage of CEV EuroVolley 2019 Women with a perfect record of five wins in as many matches as they secured the top spot in Pool D by routing Belarus. Serbia and Turkey have four wins each to their name in Pool A and on Thursday night, they will go for a major showdown to define who takes the first place in the group. Belgium sensationally beat Poland 3-2 in Lodz, while Croatia and Azerbaijan secured their qualification to the next round courtesy of their wins over Hungary and Estonia in Pool C. Hungary are on the brink of elimination and they have to hope for a miracle to happen on Thursday when the pool phase ends with the last set of eight matches.

•    Serbia opened the programme of the next-to-last day of pool play in Ankara with a 3-0 shutout of Greece.
•    The titleholders celebrated their fourth straight victory in the competition – Greece are nevertheless more than happy with their qualification for the 8th Finals.
•    Co-hosts Turkey looked just as dominant in their matchup with France, thus registering the day’s second 3-0 victory before a record crowd of 10,500 fans in Ankara Sports Hall.
•    Turkey and Serbia are due to lock horns on Thursday to fight for the top spot in the group.
•    France leave the competition while Finland and Bulgaria – resting on Wednesday – will fight for the last spot available to make it to the next round.

•    Belgium’s Yellow Tigers came back twice from one set down to record a quite sensational 3-2 victory over hosts Poland and finish the pool phase on a 4-1 win-loss record.
•    As many as 6,780 fans could not push the White-and-Reds to their fourth success in the group before they play pool favourites Italy on Thursday night.
•    Britt Herbots recorded as many as 33 points for the Tigers, who repeated the success achieved at Atlas Arena back in 2014 in a World Championship qualifier.
•    In a clash where a spot in the next round was at stake, Slovenia beat Ukraine 3-2 coming back twice from one set down.
•    As they secured their second victory in the pool, Slovenia made sure they reach the elimination round of EuroVolley for the first time in their history.

•    Azerbaijan secured their spot in the next round of the competition with a 3-2 victory over rookies Estonia. The Baltic team, making their first EuroVolley appearance, could be happy and proud of taking their very first point in the competition.
•    The Azerbaijani team, now coached by Giovanni Caprara, found in Polina Rahimova their main weapon with 27 points to her name, as Kertu Laak scored 22 times for Estonia.
•    Hungary’s hope to stay in the competition almost vanished at the end of a truly dramatic third set in the match with Croatia, which ended at 35-33 for the visitors from the neighbouring country. Hungary need to beat pool leaders the Netherlands and take three points from that match and to hope that Romania lose 0-3 or 1-3 to Azerbaijan to make it to the next round.
•    Samanta Fabris made up for Tuesday’s poor performance against Estonia to steer her team to a much-needed success.

•    Russia got back on track after a shocking loss to Germany to stun Spain in three sets.
•    Germany, however, secured the top spot in the pool by completing a clean sweep of their matches in the group phase.
•    The ‘Butterflies’ coached by Felix Koslowski delivered a supreme performance to concede only 40 points to Belarus across three sets.
•    The combination of Wednesday’s results makes sure that Spain are through to the next round as well.