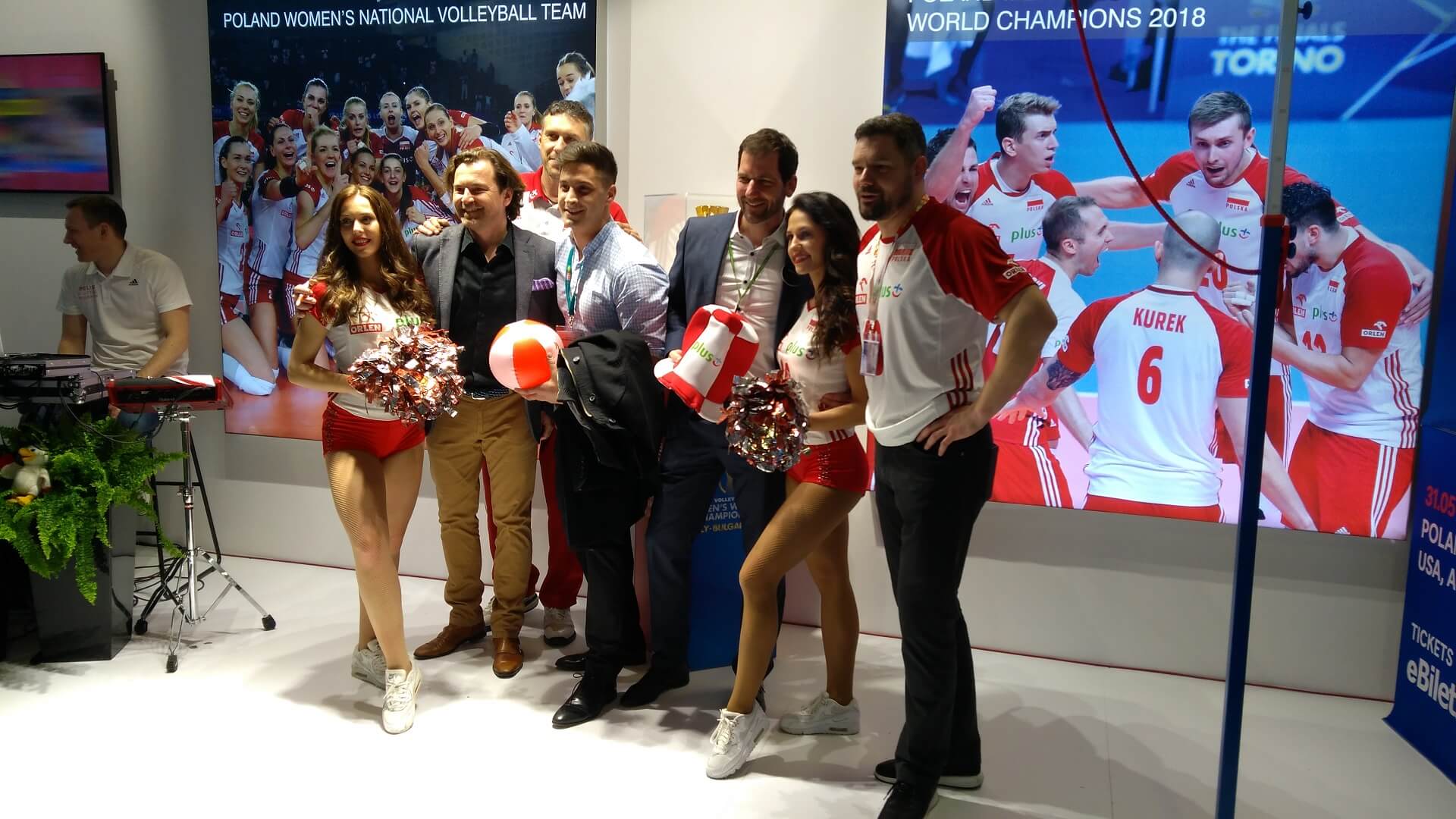 At last week’s ITB Berlin – the World's Leading Travel Trade Show – Poland has, for the first time in history, decided to showcase Volleyball as part of the country’s presentation. The exhibition prepared by the Polish Volleyball Federation (PVF) proved to be a hit with the visitors.

“Is this the real World Championship trophy? The one that you won in Italy?!” one of the members of the Bulgarian staff asked enthusiastically when he saw the precious Volleyball prize, brought by the Polish Federation to the ITB Berlin travel trade show. “I saw all your games during the championship, when you just demolished your rivals and now here I stand, next to the cup that you won!” he said joyfully. 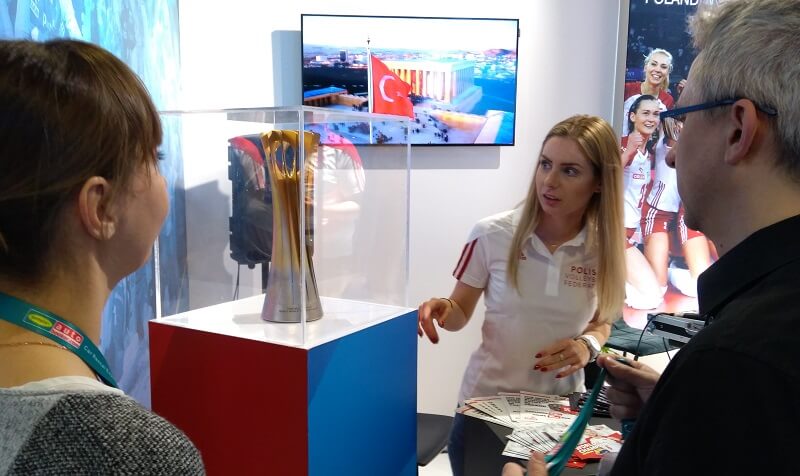 The trophy occupied the central spot of the Polish exhibition dedicated to Volleyball. This year was the first time that a decision was made for Poland to be promoted at this biggest and most important travel fair by not only the scenic landscapes of Tatra and Pieniny mountains, Krakow’s monuments, medieval knights and traditional cuisine. Poland placed its bet on sports and since Volleyball is the country’s most successful discipline internationally, it was brought along to the capital of Germany.

At the exposition, prepared and run by the PVF, the guests and visitors of the ITB could not only see the above-mentioned trophy, but also nail a high five with the national team’s mascot – the Eagle – or take a picture with the lovely cheerleaders from the Flex Sopot team, see how the good atmosphere expert DJ Grzegorz Kułaga works his magic and even test their jump reach in spike.

That last element of the exhibition was very popular in the first days of the fair. Records were noted and beaten in two categories: suit and casual. One by one, people wanted to see how high they could jump. The former Poland national team player Marcin Prus, who did a fantastic job as an animator and successfully encouraged visitors and staff members to try their hand at Volleyball activities, convinced even the undecided ones.

And so they jumped – the Germans and Slovenes, the Chinese and Bulgarians, whose stands were located next to the Polish exhibition. “I have been standing here all day, watching what you have been doing. I want to try it myself,” said one of the Bulgarian “neighbours”, one of the last to try and to join the play. 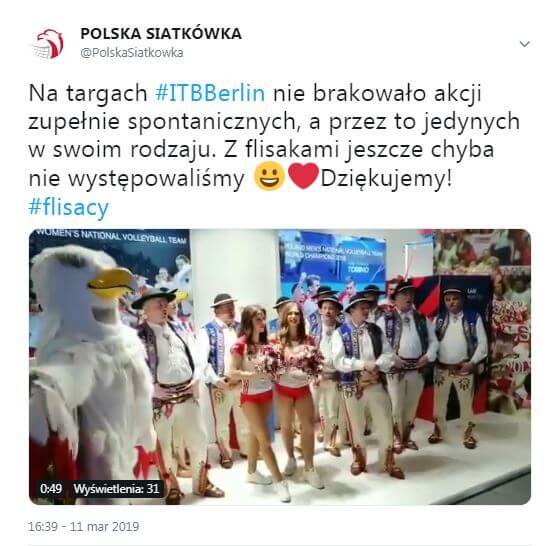 The best ones received prizes and souvenirs, and all of the competitors could take a photo with the trophy and the cheerleaders. The Volleyball part of the exhibition was the most crowded and active one, not only among other Polish stands, but also in the more general neighbourhood of Bulgaria, Armenia, Georgia, Switzerland, Slovenia and Austria. It offered something that could not be seen anywhere else, which was well noted by the deputy mayor of Katowice Waldemar Bojarun:

“At the other countries’ exhibitions, it’s hard to find a place where you could try yourself in some form of physical activity. There is an abundancy of regional, ethnic and historical elements of the exhibited countries and regions. You can see their first nations or medieval knights. However, you will not find national teams’ athletes anywhere,” said Bojarun. “This Polish stand lives and the people react to it enthusiastically,” he added.

The idea of creating a place for Polish Volleyball at the ITB was also commended by the chair of the Polish parliamentary Physical Culture Committee Ireneusz Raś, who also was present in Berlin. “It is a place where everybody presents the best they have and in Volleyball we are the reigning double world champions. We should promote our country through this success, because Poland deserves to have the face of success. We have done an outstanding work in the last 30 years, so now we cannot give a dull presentation. And Polish Volleyball is definitely not dull,” he underlined.

Presenting Poland’s No.1 team sport at the ITB is an effect of the collaboration between the PVF and the Polish Tourism Organisation. This season a “Volleyball section” was presented at similar events in Helsinki and Tel-Aviv. Its next stop is in Moscow. However, ITB Berlin is the biggest event in tourism trade. It is also of special significance to Poland, for which the Germans constitute as much as one third of its foreign visitors.

PVF appeared at the trade show not only to show pride in the defended World Championship title, but also to invite more foreign Volleyball fans to come and visit. This year Poland will be hosting six international tournaments, among them: the FIVB Volleyball Nations League Men (Katowice) and Women (Opole), two Intercontinental Olympic Qualifying Tournaments for Tokyo 2020 (men’s tournament in Gdansk) as well as matches of CEV EuroVolley 2019 Women in Łódź.

“Sporting events are a magnet, which attracts foreign tourists. We hope that many of them will come to Poland for Volleyball tournaments – among them those for whom this will be the first such visit,” said Poland’s Vice-Minister of Sport and Tourism Anna Krupka while visiting the show.

ITB Berlin Travel Trade Show took place from Wednesday until Sunday. Until Friday, it was only open for the representatives of the tourism industry. At the weekend, the doors opened for general audience and on those two days, the Volleyball exhibition was really under siege.

It appears that next year Poland will try to get more exhibition space at the ITB Berlin. This year, even though the Polish section was quite large, it was still out of the realm of tourism giants such as Egypt, India or Malaysia – the partner country of this year’s edition. Does more space mean more sporting accents? “We will consider promoting the country also through other sports. First, we want to see the effects of the Volleyball exhibition. We will be monitoring them and we should decide if we want to add more sports elements to the national exhibition,” Vice-Minister Krupka explained. Judging by the reactions of the trade show visitors who wandered into the Polish Volleyball stand – the decision can only go one way.