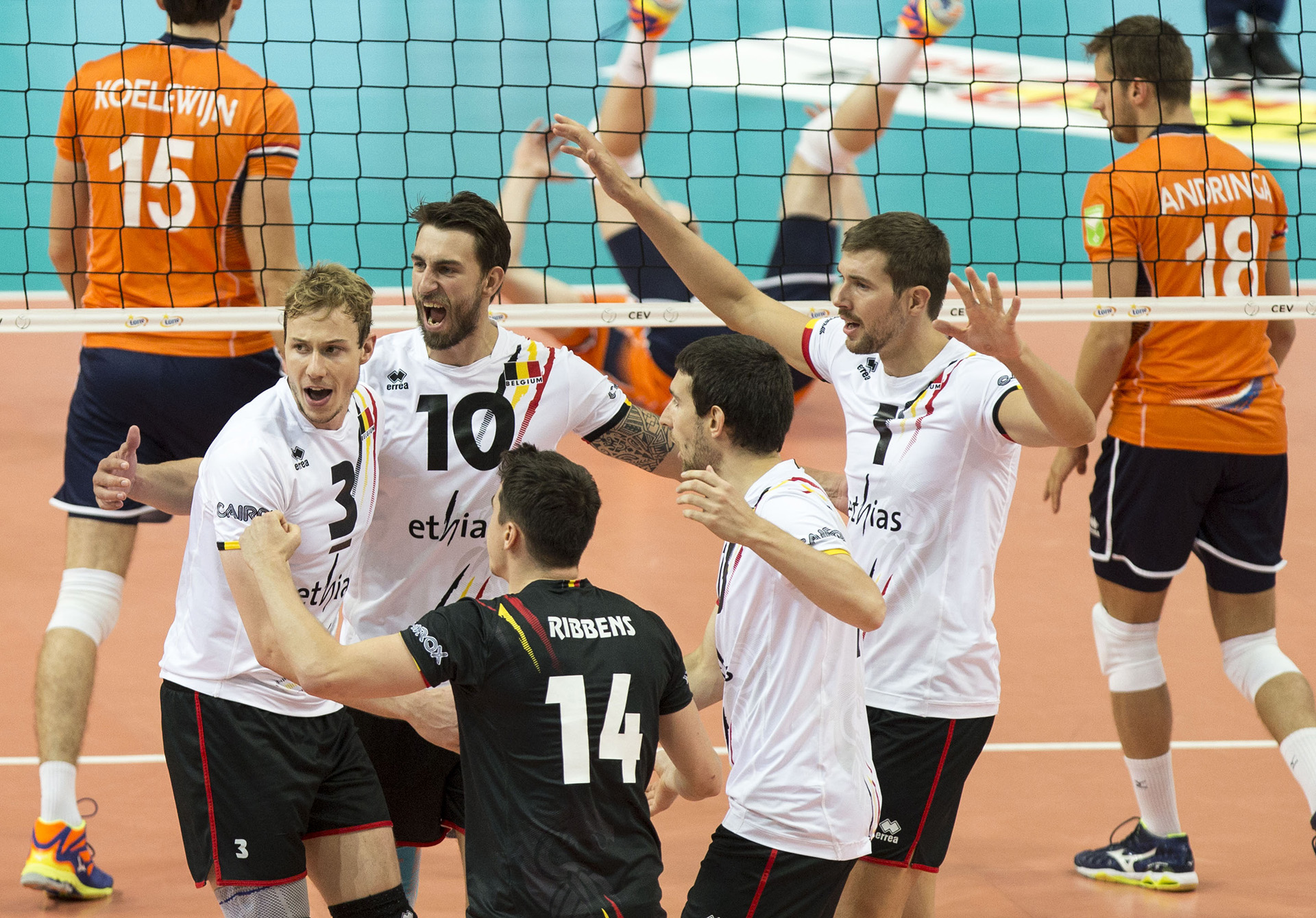 While Belgium dealt with the pressure of keeping the leadership in pool D and a jump to the quarterfinal phase, The Netherlands faced a do or die situation on the last day of a pool round. The Dutch team hit hard since the first moments, taking the lead at 3-0. Well played defence allowed both sides to perform long rallies, but The Netherlands kept three-point lead at the first technical time out after Nimir Abdel-Aziz’s spike. The advance was kept until the second technical time-out, but with an efficient block performed by Simon Van De Voorde, Bram Van Den Dries and Tomas Rousseaux followed by an ace, Belgium managed to catch up at 18-18. Their performance kept improving, allowing to finish the first set 25-21 with Van Den Dries’ spike.

An ace played by Thomas Koelewijn followed by an efficient spike of Jeroen Rauwerdink pushed The Netherlands 6-2 ahead at the beginning of the second set. As the lead was sustained until 10-6, at that moment Belgium’s middle-blocker Pieter Verhees sustained an ankle injury and was forced to leave the court. Arno Van De Velde stepped in and his performance in block and attack equalised the score at 11-11. After Sam Deroo’s ace, it was Belgium who were 12-11 ahead. A well played block and defence put Belgium 20-17 ahead and the team won the set eventually at 25-21.

Belgium quickly responded to Dutch team’s initial powerful beginning and reduced their lead, going ahead before the first technical time-out. Being one leg in quarter-finals, the Red Dragons used every possibility of winning in three sets. Despite the Netherlands’ trials of rebuilding the spirit, few point lead remained on the Belgian side. Confident Belgium folded up for the final score 25-21, sending The Netherlands out of the competition.

Vital Heynen, Belgium coach: “At that moment I can’t yet realise that we are already qualified for the quarterfinal. We played very good and stable game today. I changed players throughout the match, my athletes played like a one team and guys from the bench made the difference, allowing us to qualify to the quarterfinal.”

Sam Deroo, Belgium captain: “The start of this match was not easy. The Netherlands played really aggressive and really well, just like they did yesterday, when they played against France. As the match progressed, we have showed our quality and in decisive moments we were able to act.”

Gido Vermeulen, The Netherlands coach: “I think we have a very good young team, but we don’t have a lot of experience playing #EuroVolleyM, so this was a good experience for my players. We have to learn from our mistakes and make it better next time.”

Jasper Diefenbach, The Netherlands captain: “I think we played well up until the second set when we lost our four-point lead. We were unable to score points and repeatedly kept losing points in series. We finish as a fourth in the pool and it’s very disappointing for us.”