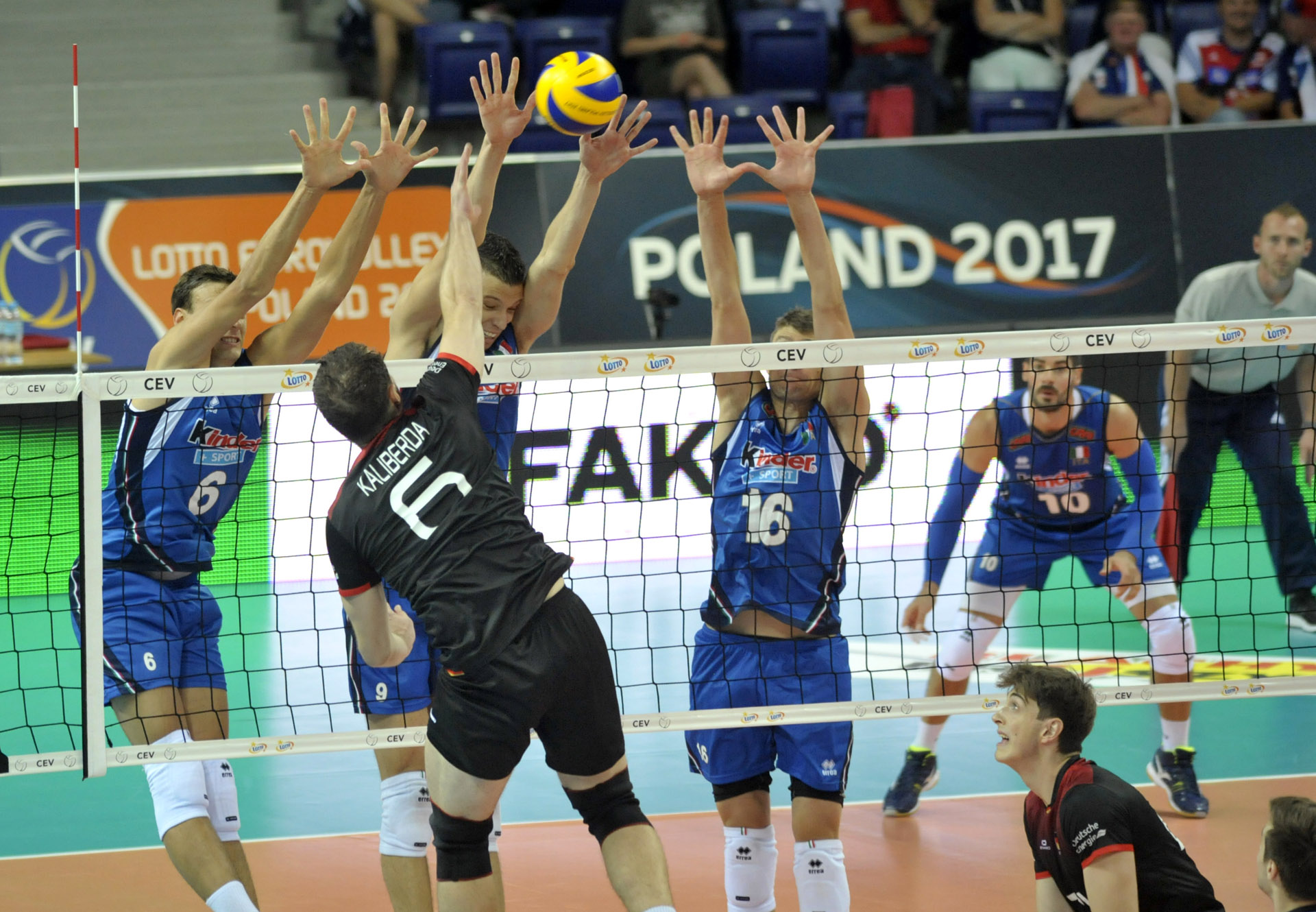 Inspired by the crowded and noisy stands at the Azoty Arena, the two teams got right into the battle and played a very competitive first set, with frequent changes in the lead. The Germans kept their cool in the conclusive moments of the set and went up to a 25-22 win, shaped up with an ace by Simon Hirsch for the last point.

The power clash continued into the second set. Until the final moments of the set the gap never exceeded two points. However, after 19-19, this time the Italians stayed more concentrated and stepped ahead. Filippo Lanza crowned his fantastic performance in this set with a brilliant back-row hit, stunning the Germans for 25-21.

Italy kept the momentum into the third set and was well in control throughout its duration. The Germans came close narrowing it down to 18-19, but a rally later Filippo Lanza got a chance to shine from the serving line and took it. With two aces in a row, he helped his squad on the way to a 23-18 lead, which moments later was converted into a 25-19 win.

After 8-8, Germany took tight grip on the fourth set. Both György Grozer and Denys Kaliberda were on fire at the net. Grozer chipped in with a couple of aces too. Italy never recovered and the Germans cruised to a 25-19 success to re-tie the match.

Coach Giani’s men were quick to set their foot on the tie-breaker too. Grozer continued to shine in both spiking and blocking and led his team to a 15-8 close and a sweet victory over the 2015 bronze medallists.

György Grozer was the man of the match hammering out 28 points for his team’s win. Denys Kaliberda added another 17. Luca Vettori was Italy’s best scorer with 18 points, while his teammate Filippo Lanza made 17.

Germany’s Marcus Böhme, who celebrated his 32nd birthday on the day of the match, came in as a sub during the second set.

Lukas Kampa, captain of Germany: "The serving and the blocking were our key factors to win the game. There were some moments of crisis, but overall it was a perfect teamwork. Now we have to sleep well and recover before the match against the Czechs."

Denys Kaliberda, player of Germany: "During the match I was not sure who was going to win. We had to play point-to-point, improve reception and, finally, thanks to the team effort, we won. But both teams were prepared well. There are two matches ahead of us. We have to perform on a high level. Fortunately, we do not play tomorrow, so we can have enough rest for the match on Sunday."

Andrea Giani, coach of Germany: "The Italian national team is a current runner-up of the Olympic Games. We knew that it would be hard to play against them. I am glad that my team showed its value and even if we struggled at the beginning with 1-2 in sets, we were able to stand up and fight for victory."

Matteo Piano, player of Italy: "I think it was a good match. Germany played better at the end, and it was the only difference between us that gave them the victory. On the paper, the rest of this group seems to be easier to play against, but neither Slovakia nor the Czech Republic have to deal with such pressure as we do."

Simone Giannelli, player of Italy: "The serving of the Germans was crucial for the fate of the tie-break. They played well and caused a lot of problems to our reception. I guess it was the key element that enabled them to win."